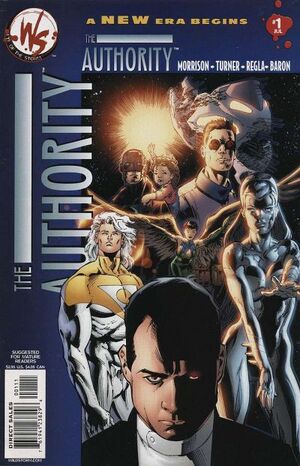 The world is too complex to be judged in comic-book terms by a group of reckless adventurers who believe themselves possessed of a higher moral authority than the rest of the human race.

Appearing in "Reality Incorporated (Part I of IV)"Edit

Synopsis for "Reality Incorporated (Part I of IV)"Edit

The Authority interferes and foil a human trafficking operation at the source of the once mighty Gamorra Island. The team kills off and defeat the remnants of Kaizen Gamorra's superhuman "children" who run the operation at the former site of Gamorra Tower with Jack Hawksmoor forewarning them. Meanwhile Swift finds one little girl among the human "cargoes" and comforts her by offering to help her find her parent. But as Swift says this, the girl's mother quickly and fearfully takes her child away from Swift, in which it disturbs her.

The news of the Authority's action at Gamorra Island garner considerable criticisms. The United States government lobbied the United Nations on condemning them and ending their continuing interference in world affairs with military force. Colonel Ben Santini of Stormwatch: Team Achilles also address his concerns about the Authority to the world, considering the fact that the Authority themselves are a powerful super-powered threat to the world that further regards themselves as better than humankind. Also, there is a trivial story in the news - the adoption of young Jenny Quantum and the supposedly negative effects that superhuman violence will have on her.

On the Carrier, Midnighter and Apollo are about to have a passionate moment in their bed, but are interrupted when Jenny Quantum teleports in. Jenny wants to have some time with her parents, but Midnighter sternly tells her to go back to her room. As Jenny does so, Apollo shares his concerns to his husband that he is being too hard on her.

In Chicago, a woman suddenly teleports into the middle of a shopping mall. A boy notices her and asks if she is a superhero. The woman replies that where she came from there are no heroes and sorrowfully apologizes to him before she suddenly glows. In the next moment the entire mall explodes. The Authority detects what had happened in Chicago and traces the origins of the explosion as of extradimensional origin, which The Engineer states that there was a rupture or gateway between realities right before the explosion. Another reality fluctuation is detected by The Engineer, but this time it is much larger. Back in Chicago, a group of hovercrafts pour out from a gateway and begin blasting the streets. One of the pilots named Duvall communicates with the other pilots to cease firing as they are targeting civilians. But he is rebuff by the other pilots as they were also civilians. The Authority then arrives on the scene and begins repelling the unknown attackers and saving lives in the crossfire.

At the same time, a group of people known as Reality Incorporated report on what is happening on Earth and reveal that the people that are attacking Chicago are a group of rebels that originated in one of their realities. When learning about the Authority, one of the older member question if they are a "problem" in which one replies that they are not, only if Reality Incorporated put their time and effort to "show them they're not."

Midnighter kicks one of the attackers off his vehicle and disarms him. Suddenly, his opponent then kill himself on purpose and his corpse begins to glow. Midnighter relays this information to The Engineer to analyze what is happening to the body. The Engineer then realizes that the dead man and his allies are suicide bombers. Midnighter is soon caught in the explosion.

Retrieved from "https://heykidscomics.fandom.com/wiki/The_Authority_Vol_2_1?oldid=1413160"
Community content is available under CC-BY-SA unless otherwise noted.