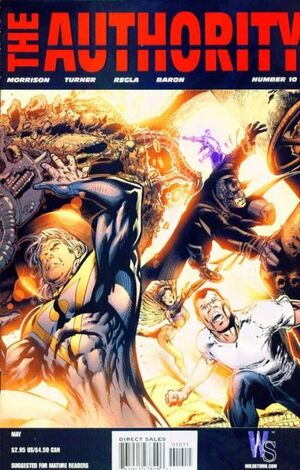 This isn't "The West Wing," it's the real world.

Since the events of Coup d'État, the Authority have gain total control over the United States of America and applying their notions of a "finer world" in America. At the same day of the coup, at a secret underground facility under Henan, China a person is force to observe the broadcast of the Authority's takeover. Suddenly, a white enormous burst emits from the facility, leaving a large crater at the middle of the city.

Three months after the coup, the Authority exerts their change of authority in American politics, ranging from health care, drugs, oil, and etc. During a press conference with Jack Hawksmoor, he is question on an unprecedented knowledge that a woman who came forward claiming to be the mother of Jenny Quantum. The Engineer meets with the supposed mother of Jenny, Michelle Leung and her lawyers in a law firm in San Francisco over the custody of Jenny. Leung had spent 18 months in a coma after the assault in which Dr. Jacob Krigstein's super-soldiers tried to assassinate her newborn daughter. And it took another year for her memory to return, and gaining her identity. The Engineer tests Ms. Leung's DNA with her nanobot to see if she is related to Jenny. Upon returning to the Carrier, she tells Apollo and Midnighter that the genetic results are positive.

Meanwhile, Swift and The Doctor are in Dallas, Texas during a presidential tour. Jeroen suddenly hemorrhage, telling Swift that there are "fractures in the Earth."

In Washington, a giant rupture to the Bleed is open and sucking debris and people into it. Hawksmoor quickly escape through a shift-door and onto the Carrier. The Engineer analyze that there is a rupture in the fabric of reality and then using the Carrier to engage a dimensional shift to pass through the breach to the Bleed, hoping to heal the rupture and saving Washington from being suck in. The effort successfully closes the rupture, but the damage has been done severely. The Engineer then receives that there are other three similar ruptures happening from around the world, bringing three different realities to Earth: water from an underwater world being flooded into Johannesburg, South Africa; alternate supervillains invading Rio De Janeiro, Brazil; and the Eiffel Tower is melting in Paris, France.

Retrieved from "https://heykidscomics.fandom.com/wiki/The_Authority_Vol_2_10?oldid=1413169"
Community content is available under CC-BY-SA unless otherwise noted.