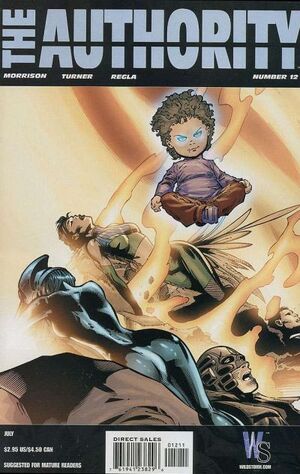 I really don't think you want to make my partner any more pissed than he already is...

Swift and Midnighter interrogates on the event that had happened in the Henan Province. When Chang refuses to cooperate, Midnighter administers his own interrogation by pushing Chang in his wheelchair down a steep hill and almost collide into a traffic intersection before being rescued by Swift.

On the Carrier, the Authority are shock to witness multiple realities are breaching into their Earth causing different chaos on several locations on Earth. As Hawksmoor barks his team on handling this, Apollo hears Jenny Quantum's cries and rushes to the engine room. But he is blasted by "Michelle Leung" and is sent plummeting downward of the engine room's shaft. "Michelle" then reveals to Jenny that she was imprisoned by the Chinese government and was turned into a killing machine, hating all life from forced watching the negative aspects of humanity. But it backfired, and turning her to also hate her Chinese superiors and decided that the only way to "save" humanity is by killing them. Apollo flies back up and confronts "Michelle".

Meanwhile, Chairman Chang admits everything to Midnighter and Swift that Chinese agents discovered Jenny Quantum has a twin sister in the ruins of Singapore General Hospital, the only survivor, who they named her Jenny Fractal when they realized she was responsible for the reality breaches. Ever since the Authority's actions in liberating Tibet from China, the Chinese raised Fractal into attacking the Authority.

Back on the Carrier, "Michelle" sheds her form to be as Jenny Fractal. She tackles Apollo and pierces his chest before being kick away by a arriving Midnighter. Swift ushers Apollo to medical treatment as Midnighter is soon later blasted by Fractal and left hanging on a scaffold. Fractal mocks over Midnighter and is interfere by Jenny Quantum. Swift meanwhile broadcast the news of Fractal to the rest of her team and the fact that Fractal is on the same deadly level as her sister and her connections to the fractures. Jenny talks to Midnighter that he must leave for his own safety as she is the only one who can beat Fractal. She resumes her fight with her sister.

The rest of the Authority regather at the White House in Washington, D.C. Apollo is on stable condition thanks to The Doctor and that the Authority have lost contact to the Carrier since Swift brought Apollo out. Consequently they cannot neither contact Midnighter nor Jenny. The Doctor is attempting to reach them psionically, and finally felt their thoughts before being struck down in pain. Midnighter arrives back, carrying a motionless Jenny, telling his team in tears that she is dead.

Retrieved from "https://heykidscomics.fandom.com/wiki/The_Authority_Vol_2_12?oldid=1528854"
Community content is available under CC-BY-SA unless otherwise noted.