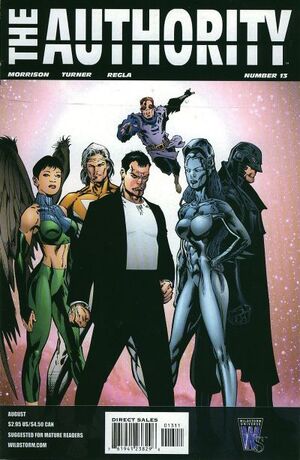 The Authority sadly looks over the deceased Jenny Quantum. In a world-wide address via com link, Jack Hawksmoor tells the world of the current fractures causing global chaos and acknowledge that the Authority are unable to save everyone that is happening right now but will die trying. He tells of the threat of Jenny Fractal, the one responsible for the fractures, and her intentions to destroy not just Earth but the multiverse by using the Carrier and its technology to act as a conduit for her powers. Hawksmoor concludes to the people to stay with their loved ones and protect them as best as they can, hoping that if the Authority comes through this everyone can help to rebuild for a better world.

Midnighter is in grievance and has given up hope. But The Doctor tells him it is not over. Jenny's spirit is left in a sort of limbo and is visit by the spirit of Jenny Sparks.

The Authority travel to Singapore where Jeroen lay out a plan in preventing Jenny Quantum's death is by sending the Midnighter back in time to the maternity ward where the Jenny twins were born to kill Fractal. However, Midnighter is too unsure about this especially of not knowing which of the twin is Fractal. Midnighter is then sent into the past as Fractal and along with the Carrier confronts the Authority to do battle.

Jenny Quantum's spirit is brought to the Garden of Ancestral Memory by The Doctor where she describes her encounter with her predecessor. Thornedike tells Quantum (briefly) of his plans to resurrect her and needing her to concentrate all she can to bring herself back.

Midnighter arrives at the time of the Jenny twin's birth as at the same time Fractal has totally beaten the Authority. He meets the twins and after looking deeply into them knows who is Fractal as he apologize to her and reluctantly kills her. In the present, Fractal's body drops dead, allowing Quantum's spirit to inhabit it, taking her twin's body as her own. As the Authority rejoice of Quantum's return, Midnighter returns to the present and refuses to go to his daughter after what he had done in the past, as Fractal at that time was entirely innocent before becoming evil. He is then comfort by Swift.

Some time later, the Authority celebrate their day: Midnighter, Apollo, and Jenny decide to go on a world tour; The Doctor is taking a few days off in hosting an international conference for the major religious institutions to discuss the spiritual development of the human race; Swift decides to return back to the social circuit to see the premiere of a new Jude Law movie and attempt to seduce him. Hawksmoor and the Engineer are left alone together. The latter ask Hawksmoor if taking over and running America was fit for them to rule? Hawksmoor answers it is not, and pointing out that he doesn't believe anyone is either. The two then decides to get "roaring drunk and chase each other around the Carrier" after a passionate kiss.

Retrieved from "https://heykidscomics.fandom.com/wiki/The_Authority_Vol_2_13?oldid=1413172"
Community content is available under CC-BY-SA unless otherwise noted.