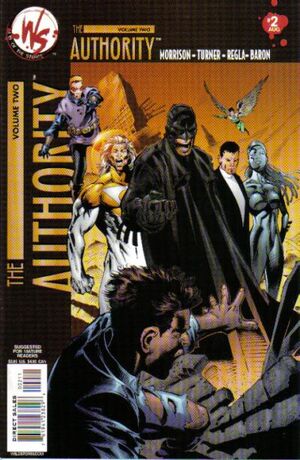 The hardest part of fighting monsters is trying to stop yourself becoming one.

Apollo sees the explosion caused by the suicide bomber engulfs Midnighter. However, The Engineer informs him that she manage to save his husband by activating a shift-door as she was in telepathic contact with him at the point of the explosion. Though Midnighter survive, he is roughed up from the concussion blast. The Engineer informs to every member of her team in warning about their enemies as essentially being interdimensional suicide bombers and soon the Authority manage to neutralize every bombers from exploding. Swift takes out the last member to be the man named Duvall captive. She then brings him down to the ground where she shows him with disgust towards the damages he and his people had caused. Duvall powers up and knocks out Shen, and stating that the damages here is nothing in comparison to his world that was caused by her world. He then begins to commit his suicide, but begins noticing the people around him and stop. The rest Authority regroup with Swift confuse to what just happen, in which Swift only tells that Duvall had a "change of heart." Just then the American military arrives and declare the Authority are a hostile power to the U.S. and are to be arrested; however, The Doctor conjures the soldiers with "a touch to their feminine side" as the Authority returns to the Carrier with a captive Duvall.

Duvall is then beaten up for sometime by Midnighter before giving Jack Hawksmoor his turn to interrogate Duvall. Hawksmoor sums up what Duvall had told him: he belongs to a rebel group whose world was attacked by a powerful interdimensional force, Reality Incorporated, that embarked on a systematic program of global genocide, wiping out almost of Duvall's race. In which his world was then being terraformed into a vast reserve of fossil fuel. And according to Duvall, his invaders came from the Authority's Earth which why the rebels attacked. But Hawksmoor doesn't believe Duvall's story and has The Doctor to scan his brain. As The Doctor does this, he sees Duvall's world in ruins and is telling the truth. In which Jeroen alarmingly state out that everything the Authority had fought to save Earth has already been won by Reality Incorporated.

Reality Incorporated brief on the event that transpired in Chicago and acknowledge that the Authority are aware of them. The organization then decide to attack them.

Back on the Carrier as it prepares to shift into The Bleed, Swift question Duvall as to why he hold back from killing himself. Duvall answers that the attack on Chicago was no different from what he had endured when Reality Incorporated invaded his world that caused the death of his son. As Swift tries to apologize Duvall for what happened earlier in the interrogation, the Carrier's alarm suddenly screeches as Reality Incorporated shiftships appears in The Bleed and sending boarding crafts into the Carrier. The crafts dispose hoards of insect-like creatures as the Authority battles them throughout the Carrier's decks. One of the creatures grabs hold of Swift and reveals itself to have a human head.

Retrieved from "https://heykidscomics.fandom.com/wiki/The_Authority_Vol_2_2?oldid=1413161"
Community content is available under CC-BY-SA unless otherwise noted.