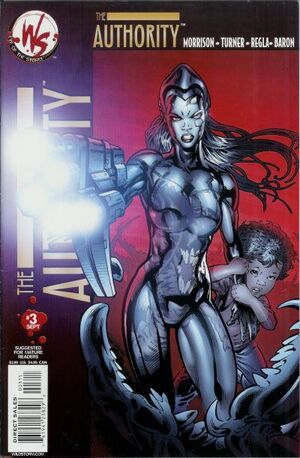 The Authority fights the creatures sent by Reality Incorporated as The Engineer analyze to her team as to what they are fighting. The creatures are hybrids spliced with both human and extraterrestrial DNA, suspecting that they are deliberately bred to be like this, and possess a hive mentality - similar to soldier ants - presently programmed to kill the Authority. The invaders are breached at three points of the Carrier: the control room, the science and recreation decks. Both Apollo and Midnighter realize that Jenny Quantum is in the latter room. As they had expect the worse, Jenny is caught by one of the creatures.

The Doctor stumbles and finds both Swift and Duvall being taken away by one of the creatures named Tyler. Jeroen is subdue by Tyler who overloaded Jeroen's brain's terror stimuli, causing the Doctor to paralyze in fear. On another part of the Carrier, Midnighter saves Jenny but is knock away by Tyler and the other creatures. Tyler threateningly corners Jenny, but suddenly her eyes begins to glow. Tyler suffers a blinding blast of energy from Jenny and as it does the same for every creature on board, killing them.

In the aftermath, Reality Incorporated's shiftships have already abandon The Bleed with both Swift and Duvall in tow. The Carrier then receives communication from Reality Incorporated, who want a meeting between them. Both groups face each other within the virtual meeting place of the Carrier's hive-mind. The leader of Reality Incorporated introduce himself as Wade Walker and that his inner circle are his children, including the now deceased Tyler. Walker tells the Authority of Reality Incorporated is the first fully-fledged multiversal corporation controlling thirty-six parallel universes. The corporation itself is clearly modeled after human imperial colonization but only at a reality scale, slaughtering native populations by untold numbers and transforming their respective worlds for either industrial exploitation or creating pleasure worlds. And furthermore inhumanely using and discarding the less unfortunate inhabitants in their conquest, ranging from slavery to outright genocide. Walker further explains that he has no interest for his and the Authority's native Earth for being too insignificant and because they are born there. Which Walker then cuts a deal with the Authority from non-interfering with Reality Incorporated or Earth will be ravaged. The Authority altogether refuses his offer.

In Reality Incorporated's dimension, Wade Walker prepares his forces to destroy Earth. A captive Swift curiously question Walker as to how he was able to garner the power and foundation of Reality Incorporated. Walker explains his story to her. In the beginning there were old and psionic beings known as the Voyagers that exists on an intellectual and philosophical plane beyond the human race. They traveled the multiverse, benevolently merging themselves with more primitive species, raising their evolutionary form and supposedly improve the entire existence in the process. For some reason, they figured humanity possessed the qualities for advancement. They arrived on Earth during the Prohibition era, and targeted Chicago mobster Wade Walker himself. During the merging it was when Walker was having oral sexual intercourse that it greatly affected the Voyagers from sheer, unadulterated pleasure. In short human nature got the better of them. The Voyagers succumbed to Walker's vices, merged into a triad form with the insectoid creatures that attacked the Authority being considered the most dangerous predator in existence, and created Reality Incorporated.

Back on the Carrier, The Engineer explains to her team that she had prepared a failsafe should any of them fell captive and having their telepathic transmission blocked. In the case of Swift, her nanobot automatically left its host and search for a safe place to reestablish contact. And as well acts as a spy, allowing The Engineer to infiltrate Reality Incorporated's computer system back to her to know where it hurt their enemy. With this invaluable information, Apollo directly attacks Reality Incorporated's shiftship which Swift tells a surprised Wade Walker that it is the end for him.

Retrieved from "https://heykidscomics.fandom.com/wiki/The_Authority_Vol_2_3?oldid=1413162"
Community content is available under CC-BY-SA unless otherwise noted.