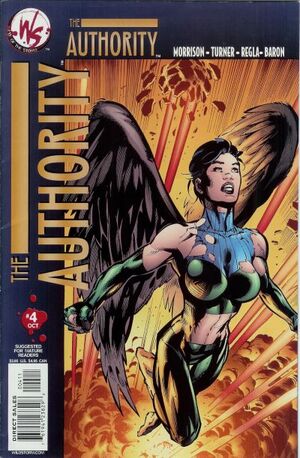 This why they're scared of us, Jack.

The Authority strikes back at Reality Incorporated, attacking various parts of its fleet heading for Earth. Midnighter kills one of Wade Walker's sons in front him, which allows Swift to break free and attack Walker. But a fighter craft crashes into the bridge, sending Swift into the ship's reactor room. She regains contact with The Engineer and learns from her that she and Apollo are busy fighting the battle fleet while Jack Hawksmoor and Midnighter are combating the insect hybrids; thus leaving Swift to be the inside person. She then finds a still alive Duvall trapped under some debris. As Swift is about to help him, more hybrid appears before them.

Outside, Reality Incorporated's battle fleet have raised their shields against The Engineer and Apollo; and are creating shift-gates to Earth. From the bridge, Walker commands to have his forces to attack but is then confronted by The Doctor. Walker is not too impress to be threaten by him, but The Doctor have something otherwise. He have Walker transport to the Garden of Ancestral Memory where he is extremely overwhelm by the conscious nature of the Garden that it finally kills him.

Swift fends off the hybrids and receives news from her team that Reality Incorporated is about to invade Earth. She is told that the only way to destroy the fleet is by destroying the stabilizing core of Reality Incorporated, which is where she is, it will cause a chain reaction that will destroy their world. In which Swift soon learns to her horror that the only way to destroy the core is Duvall himself, who he is still a living bomb. Swift is very reluctant to do this, but Duvall accepts his fate as he will not allow another world to be destroyed like his. Swift gives a passionate kiss to Duvall before breaking his neck. Duvall's body begins to glow before Swift sadly summons a shift-door to escape just as the entirety of Reality Incorporated and its fleet is engulf in a massive explosion.

Swift sits alone watching the T.V. news covering the aftermath of Reality Incorporated's demise. Angela Spica visit her and tells her that she and Duvall had done what is done to save Earth. But Swift is not happy of what she had done and replies to Angela that if she keeps telling her about that, then "one day, I might even remember that I used to think it was worth saving."

Retrieved from "https://heykidscomics.fandom.com/wiki/The_Authority_Vol_2_4?oldid=1413163"
Community content is available under CC-BY-SA unless otherwise noted.