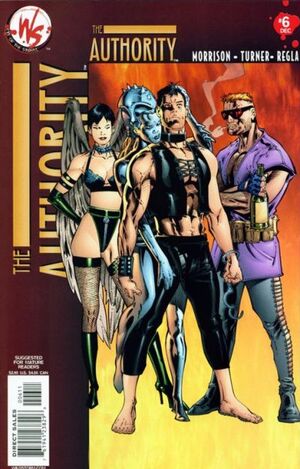 I was raised to believe in non-violence and the Authority has never achieved anything without violence.

In Utah, John Clay and his close follower Sister Voice arrive at the outskirts of Salt Lake City. Clay tells Sister Voice about the hypocrisy of the city's home religion, Mormonism. Apart from its practice of polygamy, it also touts a "no gambling" virtue while its members heavily invest in Las Vegas casinos. Clay then has Sister Voice devastate the city with the power of her loud voice.

In the Carrier, The Engineer and Jack Hawksmoor are making love. The Doctor enviously eavesdrops on the two from the Garden of Ancestral Memory. Jeroen's predecessor advise him to not let his jealousy overcome his (supposedly) enlightened mind.

In the state of Carolina, the white-power religious supremacist group Christian Power is attacked by John Clay's helicopters when they deploy a "Rage Cage" containing an invincible bestial creature.

In San Francisco, Midnighter and Apollo, in their secret identities, try to find a home in which they can raise their adopted daughter Jenny Quantum to have a normal, down-to-Earth life. A realtor recognizes the heroes in their secret identities and tries to double the price of the houses that they are interested in. As a result, Midnighter tosses him into the city's bay. Afterwards, they are contacted by The Engineer who needs their assistance in Salt Lake City.

Meanwhile in Tibet's Potala Palace, Swift talks to the Rinpoche and expressing her guilt over killing Duval during the past battle against Reality Incorporated. She is also wary of the fact that her team only achieves their goals through violence. Suddenly, the palace is attacked by winged and armed metahumans.

Retrieved from "https://heykidscomics.fandom.com/wiki/The_Authority_Vol_2_6?oldid=1413165"
Community content is available under CC-BY-SA unless otherwise noted.