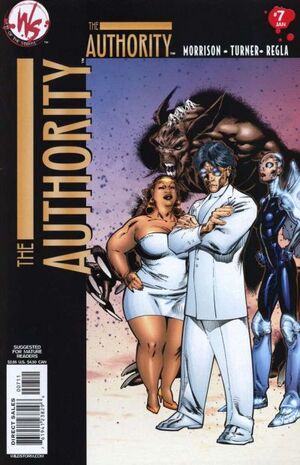 For an organization that had bored chat-show audiences across the globe to death with talk of building a better world, you authoritarians spend an awful lot of time destroying things.

Swift and the Rinpoche are surrounded by winged metahumans. She safely drops off the Rinpoche and contacts any member of the Authority to help her as she attacks the post-humans. The Doctor soon responds to Swift's call and subdues her attackers. Swift in turn is surprise to see him as he has a court case regarding his divorce with his "wife" Ms. Velez and also the fact he hasn't gotten rid of her. Jeroen reply that his troubles with Velez was more bothersome than the enemies that the Authority had previously encountered. Though, he added that with the great and unscrupulous minds from the Garden of Ancestral Memory in his racial memory would be enough to contend with Velez at court.

At the court hearing, Jeroen makes a well-argued case against Velez. After resting his case, the judge points out to him that Ms. Velez had already drop her punitive claims filed against him since her divorce. Velez approaches Jeroen and stating to him that she has changed from her usual personality, revealing that she has joined John Clay's Church of Transcendence, and ask him that he needs to "transcend."

The Authority (minus the Doctor) analyzed the separate attacks on Salt Lake City, the Christian Power compound in Carolina, and the Dalai Lama. The former of which was greatly helped by the Authority. The Engineer's autopsy and research on the assassins that tried to kill the Dalai Lama are reveal to be registered drug addicts or listed missing persons. Half of them are known to entered controversial rehab programs sponsored by the Transcendence Movement. Also the helicopters that were seen at the Christian Power compound are filmed and owned by the Church of Transcendence. Seeing the obvious ties to the Church, the Engineer explains that the Church was created by John Clay following his film career had turn downward and the growing number of followers at 13 millions and counting, and as well the smearing footage featuring the Authority's orgy to be faked. Jack Hawksmoor concludes that Clay is eliminating every other religions in an attempt to boost his own congregation.

The Authority storms into Clay's congregation in one of his "celebrity centers" in Los Angeles. Clay is not taken aback by them and expects them to come join his religion. He then approach Apollo and offering him and his husband Midnighter to have the 'cure' to be rehabilitated from their homosexuality. Apollo punches Clay, but didn't actually faze him. Clay express to him that his powers is fueled by the number of his followers, allowing him to possess the strength of 13 million people and punches Apollo, sending him flying across the globe. Midnighter attempts to attack Clay in retaliation for what he done to his husband, but is struck down by Sister Voice. Hawksmoor shares his turn to attack Clay with the power of Los Angeles, but is thrown back by Clay's powers which shatters Hawksmoor's attack. After Swift was knock away by Sister Voice, Clay approaches an unconscious Midnighter and 'transcend' him. Hawksmoor emerges from the debris and needing The Engineer to summon the Doctor before he is then attack by Clay's feral post-human. The Engineer makes her turn to attack Clay, but her nanites suddenly shut down by Jeroen, who is converted as Clay's loyal follower. Clay and his followers corners Angie and prepare to convert her. Apollo crashes back at the center after being sent around the world and is punch again by Clay. This quickly allows Angie to escape from Clay and onto the Carrier's junction room.

Retrieved from "https://heykidscomics.fandom.com/wiki/The_Authority_Vol_2_7?oldid=1413166"
Community content is available under CC-BY-SA unless otherwise noted.