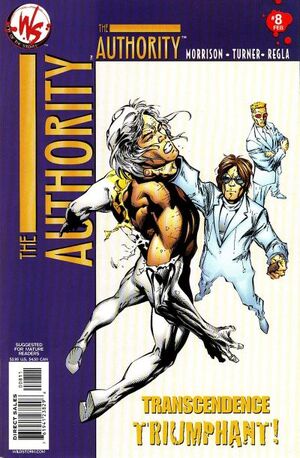 Somehow, I figured the coming of the lord would be a little more auspicious.

John Clay's Church of Transcendence goes unimpeded as the world faiths of all denominations are in danger as their respective followers, including Catholicism's current Pope, begins embracing Clay's teachings while others are being annihilated by Clay's superhuman followers. Authority members Midnighter, Jeroen Thornedike and Jack Hawksmoor are under Clay's thralls; Hawksmoor helps Clay in turning Los Angeles, his base of operations, into "Transcendence City"; Thornedike is now engaged to Lola Velez and his power in healing the unfortunates in Third World nations boosts the Church's faith. But his relationship with Velez is beginning to dim as she is becoming more chauvinistic and self-center with her worldly status; and Midnighter is force to flay himself into becoming a heterosexual despite the fact that he is still fighting against Clay's influence.

On the Carrier, the remaining members of the Authority elaborate that an estimate of 70% of Earth's population have fallen to Clay's religion and that only in two weeks would allow everyone on Earth to fall to the Church of Transcendence; however, it is noted by The Engineer that there is something that cause the mass number of people to join Clay's religion as there were rumors in Hollywood about Clay possessing a supernatural ability to influence people. Her suspicions on Clay is proven as she shows Apollo and Swift a visual recording of Clay passing his influence that spread from people to people through physical contact much like a virus. In which whenever Clay touches someone and they're immediately converted to his way of thinking, they touch any person in a domino effect. Apollo ponders if she could reverse the brainwashing, which The Engineer is unsure on this on a massive scale. She also points out that Clay's collective links to his converts gives him energy and the power that the Authority had previously witness, and that attempting to brainwash one of his followers would instantly alert him to know what his enemies are doing. Hearing this, Apollo decides to fight Clay again to distract him. But this time he'll be more ready.

Retrieved from "https://heykidscomics.fandom.com/wiki/The_Authority_Vol_2_8?oldid=1413167"
Community content is available under CC-BY-SA unless otherwise noted.