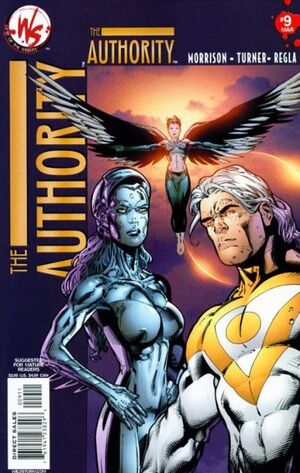 Godhead? You're more human than you realize. Another sad little man who abused his power and tried to make himself look big. The truth is, there's only one being on this world who could ever possibly be called a god...

An energized Apollo beats John Clay, sending him crashing into the streets of Los Angeles. Clay goads Apollo that he will beat him, Apollo uses Clay's colossal statue of himself to whack the Godhead.

The Engineer and Swift separately rescues Jack Hawksmoor and Midnighter; and deprogram them from Clay's psionic hold by injecting them with nanotech neural stimulants provided by the Engineer. Meanwhile, The Doctor is being openly used by Lola Velez. But while in a trance, the previous Doctors are trying to reach him.

Swift, Hawksmoor, and Midnighter defeats Clay's superhuman followers. After the Authority regather, Apollo is overpower by Clay and is punch into his team. The Doctor is finally freed from Clay's influence and have a brief revenge towards Velez by enlarging her buttocks that couldn't support her body. The Authority, that are left standing, futilely fights Clay. As Clay boasts of his self-righteousness and was about to convert the Engineer when his hands are suddenly burnt. The Doctor appears before him in gargantuan size, telling Clay that he has hijacked his psionic control of the world's population. Noting that Clay's control is nothing different from a drug addiction. Jeroen picks up Clay, while criticizing him that he is nothing more than a man who abused his powers and tried to make himself important, and kills him by swallowing him. Much to the shocking reactions from Swift and the Engineer.

The Authority return to the Carrier and the Engineer brief on her team that there are still people in major cities over the world that are gathering at the defunct media temples of the Church of Transcendence. The Doctor explains to them that he is responsible for this, stating that even though the people that were under Clay's control returned to their respective faiths there are others are disillusioned from Clay's wake and want to believe something else. Which he states of creating an alternative religion for them. The rest of the Authority reacts with discomfort, but Jeroen decide to do this by himself by creating the Church of the Shaman as he broadcast his new religion to his new gathered followers.

Retrieved from "https://heykidscomics.fandom.com/wiki/The_Authority_Vol_2_9?oldid=1413168"
Community content is available under CC-BY-SA unless otherwise noted.