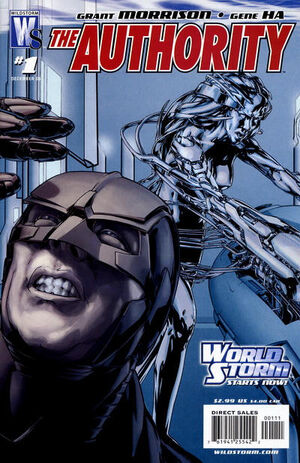 In the murky depths of the Norwegian Sea, the HNoMS UREDD submarine is under siege by terrorists. A member of the crew signals a mayday, then is shot in the head. An explosion blows the door off to the engine room, and the group of men in the room are left in awe as the doorway is framed by a mysterious yellow energy.

The following morning, a British intelligence agent named Ken receives a blocked telephone call from his agency. It’s an emergency and he must come in immediately. His wife, Joanie, is disappointed. Ken is always gone from home, and rarely has an explanation. Due to the confidential nature of his work, he is unable to offer her one.

Ken reports to work and is debriefed about the Norwegian Navy submarine that has sunk; its hull has been breached.

Ken gets a free moment and calls home to his wife. The answering machine picks up the call, as Joanie leaves their home. Joanie has had enough. She has packed her suitcase, along with the family photo, and has left home. An envelope addressed to Ken is left on the table by the front door.

Intel provides photographs of two men believed to be responsible for the submarine’s demise. The men, perhaps terrorists, boarded the sub under the guise of being part of the catering staff.

Ken leads a small team of operatives into the Norwegian Sea to perform a reconnaissance mission to inspect the sunken submarine. The unit of four men descend the depths of the sea in a small Dolphin underwater vehicle and reach the site.

Two of the men board the submarine and find the decomposing bodies of a few men, but are dumbfounded by the disappearance of the rest of the crew, which was close to 300 in number.

A member of Ken’s crew named Tor discovers the mysterious yellow energy that frames the door to the engine room.

Meanwhile, back on the Dolphin Ken and his teammate receive a call from home base indicating that a NASA angle could have been connected to the submarine’s mission. Just then, Ken notices an impossibly large structure just beyond the sunken submarine. Ken dims to lights inside the Dolphin to get a better look. By his estimate the object is 50 miles long, 20 miles tall, 8 miles across, and seems artificial.

Retrieved from "https://heykidscomics.fandom.com/wiki/The_Authority_Vol_3_1?oldid=1528856"
Community content is available under CC-BY-SA unless otherwise noted.