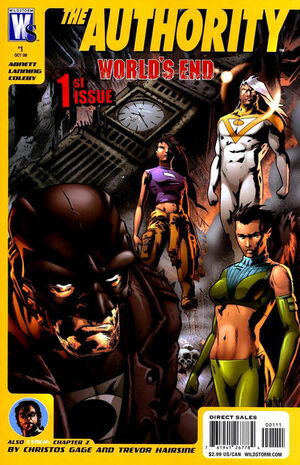 We wanted to change the world, but it changed us. And all we can do is pick up the pieces.

Following the events of Number of the Beast the Earth is in ruins and The Authority are in London, or "UnLondon" as they now call it. In the blackened sky the empty husk of a ship that was once the mighty Carrier lies fused with the city itself. Swift patrols the skies looking for survivors while the surviving birds of the air flock to her; desperate for direction amidst the chaos that disrupted their migration patterns. Midnighter is on the ground rounding up refugees when they are attacked by Incubites-beasts that have succumbed to a post collapse plague known as Warhol Fever that gives them enormous power but kills them soon after; spreading the plague.

Apollo descends from the darkened skies and incinerates the Incubites but it is soon learn that with the sun no longer shining due to the blacken atmosphere, Apollo's power drains quickly now so he and Midnighter can only have a moment together and then he must return to heavens to recharge.

Swift, Midnighter, and the refugees return to the Carrier. Angie, who is now powerless thanks to the E.M. storms, is busy working and assessing their supplies situation. Jack Hawksmoor is severely damaged, confined to a wheelchair, and apparently feeling hopeless because of the current state of the world.

John Lynch recounts the events that led to Tao's creation and his eventual betrayal. With the current state of the world, Lynch swears his duty in killing Tao for good.

Retrieved from "https://heykidscomics.fandom.com/wiki/The_Authority_Vol_4_1?oldid=1413176"
Community content is available under CC-BY-SA unless otherwise noted.