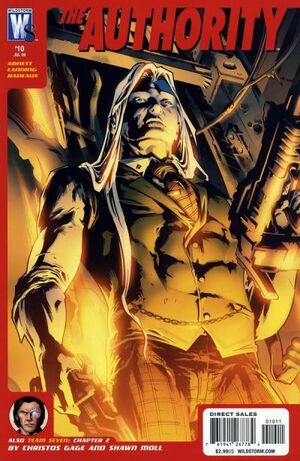 No point calling for a doctor. The patient's already flat-lined.

Appearing in "Interludes: How We All Came Through the Fire"Edit

Synopsis for "Interludes: How We All Came Through the Fire"Edit

This issue focus on the Authority and several other characters shortly after the events of the Number of the Beast.

In the moments following Armageddon, Lorenzo Antonio Slzfi still resides in his prison cell at Rendelsham. He dreams of all that has happened in his life but is suddenly awakened by an alarm.

The door to his cell is torn open by falling debris and Lorenzo steps out to see the entire Rendelsham facility in chaos. He fights off one of the escaped creatures and hears someone calling for help. He finds Hawthorne and a group of people surrounded by some of the escaped inmates and monsters. Despite loathing the man, Lorenzo decides to help Hawthorne and he tears through all the inmates and monsters. He then tells Hawthorne that in exchange for the codes to escape Rendelsham, he will keep Hawthorne and the others alive.

As The Carrier crashes into London, The Doctor (Habib Bin Hassan) stands where Jenny Quarx moments earlier took the Caged Baby Universe and disappeared. The Doctor tries to enter the Garden of Ancestral Memory for help but all he finds is more pain as all the past Doctors scream in agony.

Back on The Carrier, Jack Hawksmoor yells for The Doctor's help; his body ablaze as the cities of the world burn. But The Doctor refuses as he frantically runs through the hallways unable to deal with everything that is happening.

Apollo walks into the control room with Angie in his arms. Her nanites appear to be dead after the EM Pulse and the liquid metal slowly drips off her body. Midnighter realizes this is the future Void showed him (see Midnighter: Armageddon). But he decides that they must have affected some kind of change because in the future he saw, Swift's wings were damaged, Angie still had her nanites, and The Carrier's reactor had blown up. Then they all remember what Midnighter learned in the future concerning Jenny and they rush off to where the Caged Baby Universe was kept.

As the trio rushes off, The Doctor makes his way to one of The Carrier's many balconies. Heavy with despair, The Doctor leaps from the balcony and disappears.

The Eidolon lands in Scotland after The High threw him from New York (as seen in Number of the Beast #8). He sees that this part of the world is no better off than America. He declares there's nothing left but the dead and the mad, so he intends to make an army out of them.

As one of The High clones goes nuclear, Kaizen Gamorra watches from his tower. As the shock wave hits the force field that protects Gamorra Island, Kaizen laughs triumphantly.

Lynch continues to fill in the other Team 7 members about Tao and his plans. He tells them that Tao was not completely responsible for the state of the world but he had a big hand in it. He further tells them that Tao has captured Void and Providence who both possess the power to fix the world.

When Marc Slayton questions how they're supposed to go up against someone with the power of a god, Lynch says they can procure a god of their own. He tells them about Max Faraday and how he became the most powerful being in the universe with the power of the Creation Wheel. He says that Tao will be after Faraday and with both Void and Providence he has the power to bring down Faraday. But Lynch believes that with the combined powers of Team 7 and Max Faraday, they can bring down Tao.

Lynch sends them off with Stormwatch teleporting fetishes (courtesy of Deathblow) and tells them to keep quiet about this meeting. When he finds Max Faraday he'll call them all back and then it'll be time for war.

Retrieved from "https://heykidscomics.fandom.com/wiki/The_Authority_Vol_4_10?oldid=1413185"
Community content is available under CC-BY-SA unless otherwise noted.