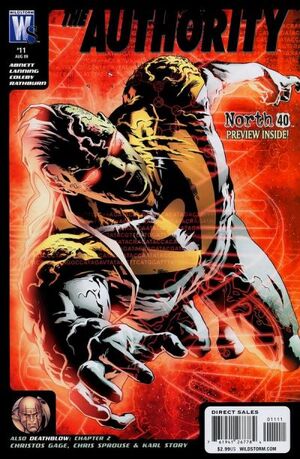 Midnighter stands high atop The Carrier sending balloons into the atmosphere desperately trying to get the missing Apollo's attention. Swift appears telling Midnighter that Angie is in the lower decks on a bug hunt and needs help.

Meanwhile, Angie is taking out a few Incubites in her Engineer form but suddenly, her nanites deactivate and she's left vulnerable. But then a partially recovered Jack Hawksmoor uses his crutch (which has a blade on the end) to defend her. But the Incubite gets the better of Jack, knocking him off his feet. Luckily, Midnighter and Swift arrive just in time to help.

Jack, Angie, Midnighter, and Swift find the Incubite that fled but it has already died. But next to it, they find a working Shift-Door. They find that some of the creatures are coming through the door. After Angie is attacked, they cut the power and deactivate the Door. Angie had her hand through the Door for a moment before it shut down and she finds her arm almost froze, with only her Engineer form protecting her.

Elsewhere, Apollo resides in the middle of our sun, trying to burn the Warhol Virus out of himself (since being bitten in The Authority: World's End #5). But he finds that virus has been fed by his time in the sun because it thrives off of heat. And in that time, it's had time to evolve and gain sentience. It tells Apollo of it's arrival on Earth centuries earlier and how it's infected life on the planet throughout history. But after the last Ice Age, it lay dormant until Armageddon hit and it reawakened. It realizes people call it the Warhol Virus but it renames itself "The Burn" and tells Apollo he's now one of them.

Deathblow finds Jackson King's revelation that he can't die, hard to believe. But King tells him the facts don't lie, and Deathblow has died at least twice and returned. Apparently all it takes is for at least one particle of DNA to still exist for Deathblow to regenerate. King then offers from Deathblow to join Stormwatch, but Deathblow politely declines, stating he'd like a go at a normal life. But King gives Deathblow a teleporting fetish in case he changes his mind.

Some time later, Deathblow is having a drink at a local bar when he hears a loud boom outside. He looks up into the sky and sees a Reaper about to go nuclear (see Number of the Beast #8). He decides to fight it but it suddenly goes nuclear, incinerating Deathblow.

Two weeks later, Deathblow awakens amongst the ruins of the bar. He then decides to contact King and take him up on his offer.

Retrieved from "https://heykidscomics.fandom.com/wiki/The_Authority_Vol_4_11?oldid=1528858"
Community content is available under CC-BY-SA unless otherwise noted.