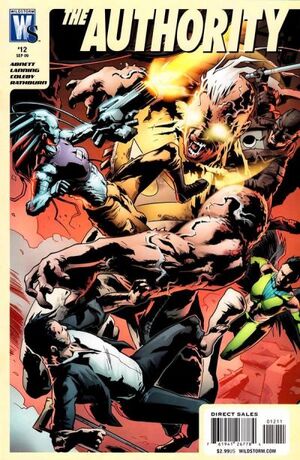 Even this...even this scenario...I've played it out a million ways...Never thought I'd end up doing this to you.

While patrolling the skies, Swift encounters an object moving at incredible speed. She radios to Angie about it and Angie uses her Engineer form to bring The Carrier to life. She orders everyone to brace for impact and then trains The Carrier's offensive weapons against the object. It easily evades the weapons and crashes through the hull. It's Apollo and he's been completely taken over by the Warhol Virus (the entity that now refers to itself as The Burn).

Apollo vomits on Angie and tells her she will soon become like him. Jack and Midnighter arrive. Jack orders Midnighter to burn Apollo but Midnighter cannot bring himself to do that to his own husband. Just then, Swift flies in and knocks Apollo into a spire; impaling him on it. But it doesn't kill Apollo. He prepares for another attack. Reluctantly, Midnigher opens fire on Apollo and burns him. Apollo runs low on energy and flies off towards the upper atmosphere.

Swift prepares to pursue Apollo but Jack tells her to let him go and to help Angie who is now infected. Angie's Nanites fight off the infection and she's able to learn about The Burn. She says Apollo's body has allowed The Burn to become sentient and it intends to steal The Carrier and use it infect the Multiverse. But she also learned how to beat The Burn.

After fully recharging, Apollo returns. But Angie has given each team member a layer of Nanite skin so Apollo can't infect them. They lure Apollo through the working Door into an extremely cold and hostile world. Then they drag him back through the portal frozen solid.

The team puts Apollo in cold storage until they can figure out what to do. But The Burn still lives within Apollo and it whispers "Soon" as Apollo's eyes glow red.

Retrieved from "https://heykidscomics.fandom.com/wiki/The_Authority_Vol_4_12?oldid=1413187"
Community content is available under CC-BY-SA unless otherwise noted.