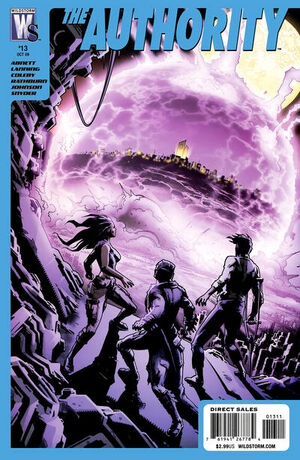 Absolutely typical that the one freakshow in the world to survive the end of it is Gamorra.

Kaizen Gamorra and the now mobile island of Gamorra float above Unlondon. His Gamorra Clones rain down a vicious attack on the refugees below.

Twenty-four hours earlier, Midnighter is having a nightmare about the now Warhol-Fever infected Apollo attacking him. In the dream he sees Habib, the current missing Doctor, then Jeroen, the previous Doctor, and finally an unidentifiable young girl who tells Midnighter to "go north, heal the land, and heal the wounded king".

Midnighter wakes up and sees that the real Apollo is still frozen in captivity. He decides to follow what the dream told him. Angie catches Midnighter leaving and after he explains himself, she sends him with her blessings and wishes him luck.

In the present, the Gamorra Clones continue their attack as The Authority rally their defenses. Jack tries to contact Stormwatch but they are out of range. Angie links up with The Carrier's defenses and begins mowing down the clones. Swift joins in the attack and takes out several of the clones as well. But the clones still break through and Angie is forced to retreat deeper into The Carrier.

Jack tries to get the refugees down below UnLondon. But Cybernary catches up with him and holds him at bay.

Retrieved from "https://heykidscomics.fandom.com/wiki/The_Authority_Vol_4_13?oldid=1413188"
Community content is available under CC-BY-SA unless otherwise noted.