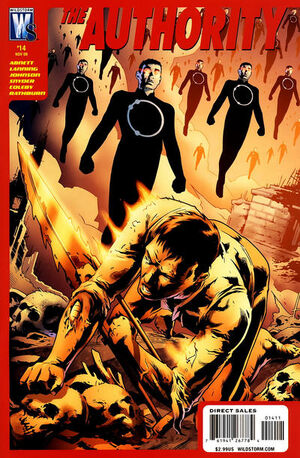 Appearing in "At the Door"Edit

Synopsis for "At the Door"Edit

Cybernary and Jack Hawksmoor are engaged in battle. Jack has regained some of his abilities and is able to meld with The Carrier. Unfortunately, he is still weakened and Cybernary is able to take him out.

Angie is trying to get the remaining refugees below ground. She calls Rendelsham for help but they choose not to respond. Suddenly, the Gamorra Clones find Angie and the others.

Swift is trying to take out as many of the clones as she can by luring them within range of The Carrier's defense systems. The clones corner her and Swift thinks she's done for but suddenly The Golden arrive from Rendelsham with two huge heavily armed robotic harriers.

Angie also gets cornered by the clones but she too is saved by a harrier. But this harrier is piloted by Lorenzo. As Angie begins to thank Lorenzo for his help, Lorenzo reveals he is not here to save them. He knocks out Angie and takes her aboard his harrier. Then he and The Golden, who have captured Swift, retreat from the battle.

Meanwhile, on the Scottish Borders, Midnighter approaches a lake that appears to have a fully vegetated island in the middle of it. He finds some masked goons are denying access to some refugees who are asking to cross to the "Holy Land." When one of the guards threatens Midnighter he takes him out as well as another guard. Then he commandeers a boat and prepares to head to the island. But he is suddenly confronted with what appears to be a giant golden dragon.

Back in Unlondon, Kaizen Gamorra has captured The Carrier. He orders his clones to strip it of all the technology they can.

At Rendelsham, Lorenzo tells Swift and Angie that he kidnapped them so Angie would help him with the Door they found so they can explore The Bleed. He claims that nothing that's gone through has come back including one of The Golden. When Angie refuses, Lorenzo has Swift thrown through the Door. He then tells Angie that if she wants to see Swift again, she'd better start cooperating.

Retrieved from "https://heykidscomics.fandom.com/wiki/The_Authority_Vol_4_14?oldid=1413189"
Community content is available under CC-BY-SA unless otherwise noted.