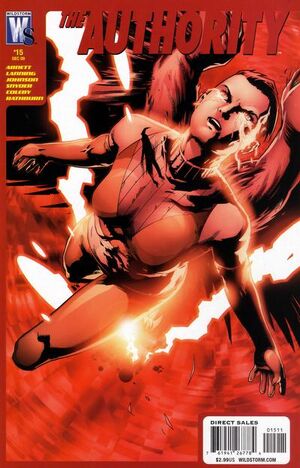 I guess it's not every day you get to see someone commune with technology using the nanites in her bloodstream.

Kaizen Gamorra has captured The Carrier and Jack Hawksmoor along with it. As he tortures Jack, Kazien tells him that he intends to steal The Carrier's technology which allows it to travel The Bleed. Then he can take his now mobile Island of Gamorra anywhere he wants.

Meanwhile at Rendelsham, Lorenzo shows Angie that they have a miniature version of the Caged Baby Universe that used to power The Carrier. He wants her to use it to make the working Door they have safe and secure.

In The Bleed, Swift flies around trying to figure out which Earth is hers. But she finds that there are too many possibilities.

Angie makes contact with the Caged Baby Universe and finds out it was made by the same creators of The Carrier. The Baby Universe tells Angie that it was found by The Establishment in the 1950's by Professor Q and they've held it captive ever since. It asks Angie to help it. When she agrees the Baby Universe takes Angie's nanities away from her but quickly gives them back fully upgraded. Then Angie convinces The Golden that she can help find their missing brother. The Golden see she is telling the truth and destroy the robotic guards posted nearby. Angie then proceeds to try and contact Swift in The Bleed.

Elsewhere, Midnighter is still dumbfounded by the sight of a huge dragon which has appeared before him while attempting to cross a lake at the Scottish Borders. He uses a grapple line from the boat to climb onto the dragon. He then holds on as the dragon flies over the island. He then breaks its neck and falls into the lush forest below. In the forest, he observes a group of refugees being approached by a being calling itself The Green Man. It promises to heal them all but then uses its powers to control the surrounding woods to kill the refugees. Needless to say, Midnighter is not happy about this.

Angie and The Golden tear through Rendelsham and its defenses. Angie demands Lorenzo's surrender and when he does, she access the Door with her new tech. She finds Swift who in turn has found the lost Golden. She tells them that this Golden found Sliding Albion but he couldn't find his way back. Just then, Lorenzo slashes Hawthorne's throat and jumps through the Door. But Angie calls for it to close as he goes through. Lorenzo lands in Sliding Albion but he's missing half his body.

Hawthorne is dead. Swift and Angie prepare to take down back The Carrier from Kaizen and his forces.

Retrieved from "https://heykidscomics.fandom.com/wiki/The_Authority_Vol_4_15?oldid=1413190"
Community content is available under CC-BY-SA unless otherwise noted.