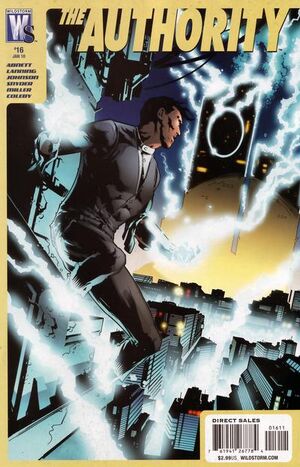 Jack Hawksmoor has been captured by Kaizen Gamorra and brought to the floating Island of Gamorra. But Kaizen soon learns that he made a mistake bringing Hawksmoor into the only living city left on Earth. Jack bonds with the city and tells the entire population that they are trapped. Kaizen sends out his Gamorra Clones to find Jack but Jack takes them out easily.

Swift and Angie arrive to rescue Jack but they soon learn he's got everything under control. But Kaizen's forces arrive en masse. The three split up to deal with the threats and Jack is confronted by Cybernary. But Jack lets Angie deal with Cybernary by taking all her cybernetics away, leaving only a defenseless Katrina Cupertino.

Meanwhile, Swift drops a little surprise on Gamorra Tower, in the form of a frozen Apollo. Jack then separates Gamorra Tower from the rest of the city and encases it in the force field, letting The Burn run rampant within thanks to the infected Apollo. As Kaizen watches his city tear itself apart, Apollo confronts Kaizen and disintegrates his head. Then Jack drops the city deep within the Norwegian Trench so The Burn will go dormant in the cold environment until they can find a cure for Apollo.

In Scotland, Midnighter finds the group that he fought with earlier in a castle. But he is captured by some vines and dragged into the castle where he is before a man that appears to be half plant. Midnighter realizes that it is Habib bin Hassan, the missing Doctor!

Retrieved from "https://heykidscomics.fandom.com/wiki/The_Authority_Vol_4_16?oldid=1413191"
Community content is available under CC-BY-SA unless otherwise noted.