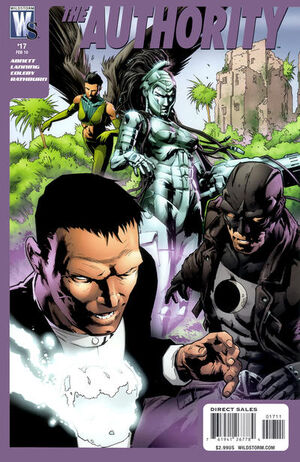 He's totally nuts and he has the power of a god. We're screwed.

-- Jack Hawksmoor, referring to the insane The Doctor.

Midnighter has found the missing Doctor, Habib bin Hassan. But he has been driven mad by the current state of the world and now calls himself the Green King. He intends to wipe out the remnants of humanity from the Earth, claiming it's their fault the world is like this now.

But Midnighter is pulled into an astral form by Gaia Rothstein, a new century baby. She reveals that it was her who has been guiding him in his dreams. Gaia says she's linked to the Earth's biosphere so when Armageddon hit, the Earth went psychotic. To get away from the planet's screams, Gaia went to a green place where she could hide. The Doctor found her, he too trying to escape the planet's screams, but it drove him mad. He kept her and used her form as the island they are currently on. She used her astral form to try and find help. She found Apollo but realized he was infected by The Burn. But beneath the infection, she sensed Apollo's love for Midnighter which is why she sought out Midnighter.

Midnighter comes to but finds The Doctor standing over him preparing to execute him. But the rest of The Authority arrive in time to stop him. Jack Hawksmoor tries to kill The Doctor but he keeps regenerating. Swift grabs The Doctor and flies into the air in order to separate him from Gaia (as the island). When she does, The Doctor vanishes. Gaia tells the others that she'll find the Doctor and heal them both. But before she leaves, she gives Midnighter an apple and reminds him of the story of Avalon and the Isle of Apples.

Back on The Carrier, Midnighter figures out to feed the apple to Apollo. They thaw him out and Midnighter feeds him the apple. Apollo awakens with a flash of white hot light. He walks over to Midnighter, embraces him, and kisses his lover while the rest of the team looks on with smiles on their faces.

An intense beam of light is witnessed by several alien races blasting through deep space. It smashes through planets, the Pioneer 10 space probe, Aegenans and Tilaugans (the race from Brass) in the middle of combat, across the surface of the moon, passing a being in space that appears to be Union, and finally reaching The Carrier on Earth as the refugees look upon it.

This is Dan Abnett and Andy Lanning's final run on The Authority.

Retrieved from "https://heykidscomics.fandom.com/wiki/The_Authority_Vol_4_17?oldid=1413192"
Community content is available under CC-BY-SA unless otherwise noted.