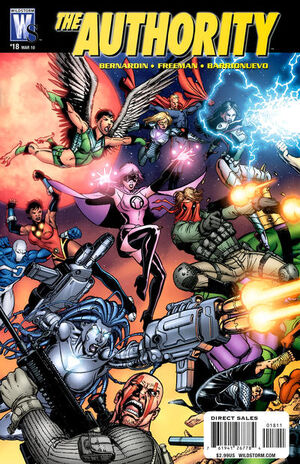 I gotta say, when I woke up this morning, I didn't think I was gonna be an astronaut.

A strange energy source from deep space has locked itself onto The Carrier. Angie tells Jack that whatever it is, it's re-powering The Carrier. Angie finds that they have working Doors again and begins summoning teams from around the world: the Wildcats, Stormwatch, Wetworks, Gen 13, The Intimates, and the New Dynamix.

They then use Maul to announce the same choice to the refugees. Jackson King debates with Christine Trelane that they need to stay behind and finish fighting the Knights of Khera. But Christine believes that this could be a way to get help for the planet.

Meanwhile, the refugees get violent as they fight to see who goes and who stays. Deathblow and Midnighter defend The Carrier's main entry while Gen 13 decides to step in and help. But the energy beam has disappeared and The Carrier prepares to take off. Swift tells the remaining refugees to get on now if they're coming but soon the doors to the ship closes.

But as The Carrier preps for departure, Jack informs Jackson that he is detecting an incoming Kherubim warship. Jackson knows it's the Knights of Khera and their ship The Red Blade and tells everyone to stand ready. As they prepare to engage The Red Blade, The Carrier rockets off into space.

Retrieved from "https://heykidscomics.fandom.com/wiki/The_Authority_Vol_4_18?oldid=1413193"
Community content is available under CC-BY-SA unless otherwise noted.