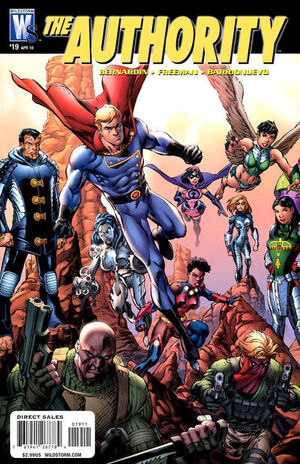 He likes authority. His team is named Authority. You gotta tread lighter, girl. Even if he is wound a little tighter than usual...

The Carrier is on full automatic as it blasts out of Earth's atmosphere. Heroes and civilians alike hold on for dear life within the great ship. Jack can't find The Engineer but Christine Trelane is able to pull up video screens. They see there is chaos throughout the ship. Jack demands they do a roll call of who made it on board.

Jack summons all the heroes to the bridge. The only heroes who show are Freefall, Rainmaker, Grifter, Swift, Flint and Deathblow. In which Jack officially declared them as members of The Authority. They are unable to locate Angie. Christine delegates missions for everyone in order to restore order amongst The Carrier's new population. Jack isn't happy about the fact Christine is taking over authority from him.

Grifter and Deathblow are in charge of policing the population. They get distracted by a young boy who appears to be hurt but runs away from them. They chase after him but lose him. Rainmaker and Freefall are left alone by Swift to gather medical supplies. Christine and Flint head down to the chamber where the baby universe was once stored. Meanwhile, Jack heads down to a room with a mysterious device that he claims is his "insurance policy" if all of this doesn't work out.

Grifter and Deathblow finally find the boy. But a strange man in a cloak asks them to leave the boy alone, calling the boy River. The boy mumbles something about possible hostiles, but before they can ask too many questions, Christine calls them and everyone back to the bridge.

Over the intercom, Christine informs them that they'd better start acting as a team or else everyone will die. The Carrier is on a direct course with Daemon, the Daemonite home world!

Retrieved from "https://heykidscomics.fandom.com/wiki/The_Authority_Vol_4_19?oldid=1528857"
Community content is available under CC-BY-SA unless otherwise noted.