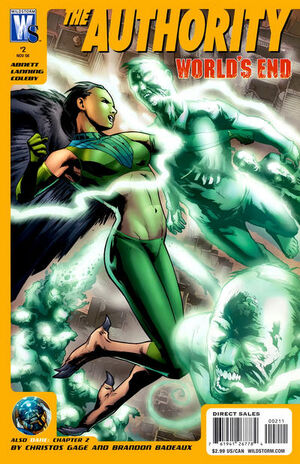 Life is wasted on you.

-- The Eidolon, just before he kills a Londoner.

In UnLondon, Swift is looking for Midnighter. However, a 'soulstorm' hits, and she is overwhelmed by the ghosts of London's departed. She lands in a bed in an abandoned apartment, and is vaguely aware that she is being watched by three of the ghosts before she passes out. The ghosts depart with the rest of its brethren, and the sky clears. Swift regains consciousness, just as several survivors are caught by a large group of thugs in the street outside. She helplessly sees the group brandish cleavers and brass knuckles, but it is their leader that scares her - The Eidolon, who has gone seemingly mad. The Eidolon refers to the thugs as his "Army of the Mad", and offers the survivors a place by his side. However, when they beg for mercy, he kills one of them, and order his followers to kill the rest. In fear, Swift flies away.

At the Carrier, Angie is experimenting with her nanite blood, trying to restart the Carrier's tech. She has a brief success before it shuts down, but she is called away to meet Swift. As she leaves, a metallic spider is watching her...

The news of Eidolon's approach is worrying, but Jack Hawksmoor is adamant: they will welcome him and his Army of the Mad and offer them food and shelter given that "we're all survivors". Midnighter is disgusted in hearing this and decide to make a stand against the Eidolon's forces by himself. Jack reason that posthuman aggression was what caused the world to its current condition, and that they can barely defend themselves anyway. Midnighter argues that it doesn't matter as the people that they are helping are going to be like themselves, but Jack refuses to fight the Eidolon. Midnighter leaves, saying, "This is what it looks like when I don't listen to you."

At the Army of the Mad's campsite, on the south bank of what was once the Thames, the Midnighter strikes hard and fast, cutting through sentries and guards with ease. This draws the attention of the Eidolon, and the Midnighter offers him two choices: fight or talk.

In the Alps, Jackson Dane is skeptical of John Lynch's offer to reform Team 7. Lynch states that he "might have found a way" to restore the world to it's original state, but Dane sees to much uncertainty. Using his telepathy, he explains his status...

Prior to World's End, the Night Tribes - vampires, werewolves and demons - had begun to ally, and putting aside their ancestral differences. When the disaster hit, giving most of Eastern Europe a permanent cloud-cover, the Night Tribes took over, herding the surviving humans into 'food camps', to breeding the strong and weeding out the sick. Wetworks have been active, founding a resistance movement and liberating camp after camp. He tells Lynch that after having the entire surviving human population of Eastern Europe evacuated to the 'Sunlit Zone', in the Alps, and with no food, the Night Tribes are on the verge of a war with Wetworks.

With so much at stake, Dane cannot abandon his teammates and does not believe that Lynch can do what he claims. He declines Lynch’s offer but Sister Mary quickly warns him not to give up on Lynch yet.

Retrieved from "https://heykidscomics.fandom.com/wiki/The_Authority_Vol_4_2?oldid=1413177"
Community content is available under CC-BY-SA unless otherwise noted.