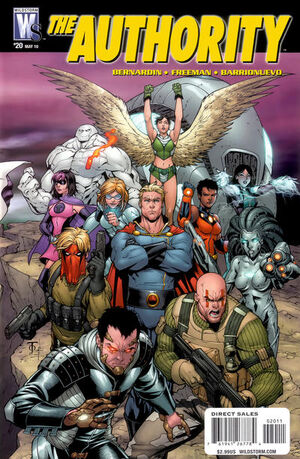 What would you have me do? We're fighting for our lives--for 'their lives--and they repay us with mutiny? Describe a scenario where that is acceptable.

-- Jack Hawksmoor, arguing his right to impose martial law on the disgruntled refugees.

Christine and Jack assess their situation as the planet Daemon looms ahead. The Carrier's com system is getting interference so Jack can't summon the other heroes. He sends Flint to track them all down.

Deathblow and Grifter continue their patrol of the ship but are suddenly met with a hail of gunfire. Flint arrives just in time to help them against the barrage.

At the med-lab, Freefall and Rainmaker try to deal with the incoming wounded. The old man in the cloak and the boy named River (both seen last issue) arrive and Roxy thinks she recognizes the old man. But suddenly, a group of humans and meta-humans burst in looking for supplies and attack.

A Daemonite fleet surrounds The Carrier ready to attack and demanding that they deviate from their current course. Christine and Jack have no luck trying to communicate with the fleet as Flint, Deathblow, and Grifter arrive on the bridge. Then Swift arrives with the Engineer's jumpsuit and believes that she was taken by some of the hostiles on board. Just then, the Daemonite fleet decides to attack.

Back at the med-lab, Freefall and Rainmaker are able to get all the intruders out. The old man in the cloak is revealed to be the hero The High. But he claims he is no longer The High (after giving up his powers in Stormwatch PHD #22) but says that the boy River is special. River's powers activate and he can "see" the enemy fleet out in space. He concentrates and the entire Daemonite fleet stops their advance. Then he causes some of the ships to explode. But the strain is too much and he collapses into the arms of The High.

Christine and Jack prepare for the Daemonites next wave of attack when The High comes storming into the bridge with River in his arms and the rest of the heroes behind him. He claims River is the Spirit of the 21st Century. Jack tells him that can't be because Jenny Quantum is the Spirit of the 21st Century just like Jenny Sparks was Spirit of the 20th Century. The High tells Jack that he gave Jenny Sparks that name and just like Jenny could control electricity, River can control information. River used his power to destroy part of the Daemonite fleet but it almost killed him.

Just then, a huge group of S.P.B.'s and refugees raid the bridge and Jack orders the heroes to fend them off. The irate S.P.B.'s and refugees want River because they think he can help them get back to Earth. The heroes hold them off and Jack declares Martial Law aboard The Carrier in order to keep the peace. Suddenly, a blinding flash of light heralds the return of Angela Spica as The Engineer!

Retrieved from "https://heykidscomics.fandom.com/wiki/The_Authority_Vol_4_20?oldid=1413195"
Community content is available under CC-BY-SA unless otherwise noted.