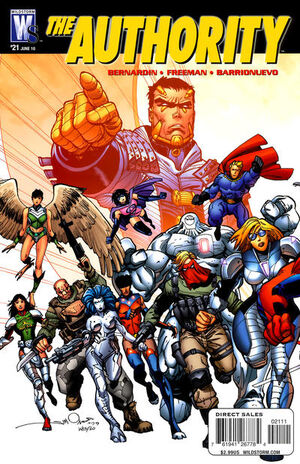 Wow. Can't say as I've ever seen a chick with anti-spacecraft dandruff before...

Angie has returned and in her Engineer form and she seems to be directly linked to The Carrier now. She causes a structure of segmented shapes to appear on The Carrier's hull and then propels them at the Daemonite ships, destroying the first wave. She takes care of a second wave by luring them into one of the Carrier's bays and initiates a miniature dimensional collapse that crushes another wave of Daemonite ships. She then directs The Carrier away from the planet Daemon.

The Carrier and Angie have merged and Angie is in direct control over The Carrier now. She disappears to attend to other parts of the ship. The refugees who led the revolt threaten to start up again but Jack Hawksmoor reminds them that they are up against a greater power. Christine Trelane in turn reminds Jack that it's this kind of attitude that caused what happened back on Earth.

Frustrated, Jack runs off to look for Angie. He finds her and tells her since Kaizen Gamorra messed with him (The Authority: World's End #16) he hasn't felt the same. She tells him that she can't be there for him to lean on anymore but as long as he's on The Carrier, she'll be listening. With that, she vanishes once again.

Christine is at her wits end. She runs after The High and tells him that they need him. But he tells her that he's done with that life and not only that, he's dying (due to the effects of the pod he put himself inside of in Stormwatch: PHD #22). The High is intent on taking care of River while he's still alive as some sort of penance for failing to help the world. But Christine tells him it doesn't have to be that way and out here, they're all alone. So, they should rely on each other.

Deathblow is running a training session with Freefall. Jack asked Angie to help them learn about all of the areas within The Carrier but she refused. So, he sends Grifter, Deathblow, and Flint on a reconnaissance mission. Although she won't help directly, The Engineer does help by giving the group "vocal markers" of where they've been.

Jack is standing before the mysterious box he's visited before. Rainmaker catches up with him and asks him about it. He won't tell her what's in it and that bothers her.

The Engineer sees some refugees who had their beds stolen and she replaces the beds with parts of The Carrier walls. The refugees begin worshiping her.

While in the bowels of The Carrier, Grifter, Deathblow, and Flint come across vampire remnants of the Night Tribes.

The cover to this issue links up with the cover to Wildcats: World's End #22.

Retrieved from "https://heykidscomics.fandom.com/wiki/The_Authority_Vol_4_21?oldid=1413196"
Community content is available under CC-BY-SA unless otherwise noted.