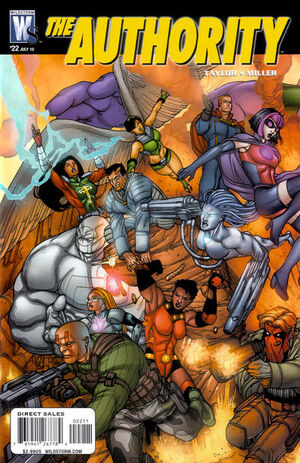 If I hear a high-five back there... I will celebrate being alive all by myself.

Flint, Deathblow, and Grifter have discovered that vampires have stowed away on The Carrier, and quickly move to eliminate them. The Engineer detects the battle, and tells Jack Hawkmoor that they're fighting too close to the Carrier's power conduits; if those are damaged, the whole ship could be affected.

Rainmaker and Freefall show up to assist them. One lead vampire, Micosta, tries to rally the others, but Freefall uses her powers to crush him.

Angela Spica decides the best way to quell the infestation is to jettison everyone in that sector into space, including the civilians and the heroes. Jack tells Angie that he won't allow, this and the others scramble to get everyone out before the Engineer opens the airlocks. Meanwhile, Christine finds The High and tells him that they need him. He agrees to help and lets her reactivate his powers.

The Engineer begins venting the sectors, and Flint tries her best to hold on to Grifter and Deathblow as vampires are jettisoned into space. Elsewhere, Freefall helps an unconscious Rainmaker as Angie prepares to jettison their sector as well. Swift tries to stop Angie, but to no avail.

Suddenly, The High arrives, re-powered, and helps seal the sector. However, Angie reveals that the Carrier is nearing a sun, and renders the entire ship transparent, which allows the sun to shine through and incinerate the vampires. Flint takes Grifter somewhere private to "celebrate" as everyone regroups, and The High is even reunited with River, who was hiding during the whole fiasco.

Retrieved from "https://heykidscomics.fandom.com/wiki/The_Authority_Vol_4_22?oldid=1413197"
Community content is available under CC-BY-SA unless otherwise noted.