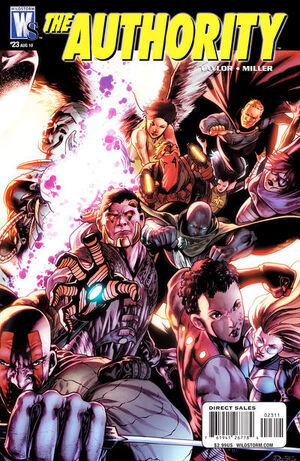 "Because we're heroes." If anyone else had've said that, I would have laughed in their face. But he says it...

Swift is speaking with Angie (who is now more herself than being under the influence of the Carrier) about the battle they just had with the vampires. Just then, Grifter walks out of Flint's room in his underwear. The four share an awkward moment. Christine is checking The High's vital signs and finds that not only are his powers back, but he is no longer dying.

Later, Angie calls everyone to the bridge. She shows them what appears to be a ship graveyard. It has remnants of dozens of ships belonging to alien races which include Kheran, Daemonite, and even other Carriers. River detects a lifeform within the graveyard and Angie confirms it. Angie can't stop The Carrier but she can slow it down long enough to investigate. The High volunteers to do the investigating.

The High comes across an Aegean ship and finds a survivor who has a Justice Stone in him like the hero Union. They take the Aegean to sick bay. Grifter and Deathblow arrive to guard him. But no sooner are they alone with the Aegean does he wake up and trash the entire medical bay in moments; killing all the people within. Deathblow and Grifter barely survive the attack.

Swift flies into the medical bay but is quickly tossed aside by the Aegean. Jack tries to take him on next but before he can, The High arrives and knocks the Aegean through several walls of The Carrier. But before The High can continue his attack, Christine calls him back to the bridge saying River has detected something. Jack, Rainmaker, Freefall, Flint, Deathblow, and Grifter stay behind to deal with the Aegean.

The High arrives at the bridge to find River saying the name "Mondregon" as the destroyed ships outside have combined into what looks like a giant squid-like creature that dwarfs The Carrier.

Retrieved from "https://heykidscomics.fandom.com/wiki/The_Authority_Vol_4_23?oldid=1413198"
Community content is available under CC-BY-SA unless otherwise noted.