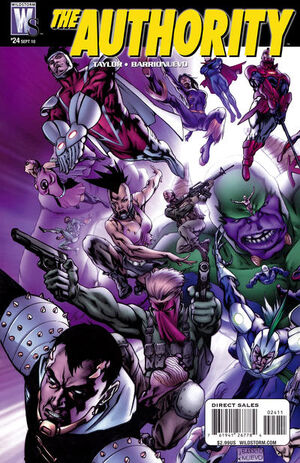 We should be dead. The creature you're seeing is far more powerful than anything we could hope to counter. There have been fights aboard the ship, petty squabbles, but out there is a man willing to sacrifice everything to save you. Let him be your example. His name is John Cumberland--he won't be returning...

River lets the crew know that the creature that's attacking them is called Mondregon. It is using the Aegean as a puppet to cleanse The Carrier of any threats to it while it feeds off of all life on the ship. Mondregon attacks The Carrier but River is able to hold it back with his powers.

Meanwhile, inside The Carrier, Jack, Grifter, Flint, Deathblow, Freefall, and Rainmaker attack the Aegean. Flint is the only one who can hold her own against the Aegean. Jack tells Freefall to use her powers to smash the Aegean exactly four floors below them. There, Jack tells them all to force the Aegean into the room where he's kept his mysterious box. He gets to his box and unleashes an EMP gun within it which he uses to defeat the Aegean.

The High volunteers to distract Mondregon so The Carrier can escape. The others tell him he can't possibly defeat it but he wants redemption for what he's done in the past. He ask Christine to take care of River and with that he flies out to meet Mondregon. As The High flies out into space, Angie broadcasts his act to everyone on The Carrier. River whispers to himself, "Dad" as The High collides with Mondregon is a blinding flash of light.

Retrieved from "https://heykidscomics.fandom.com/wiki/The_Authority_Vol_4_24?oldid=1413199"
Community content is available under CC-BY-SA unless otherwise noted.