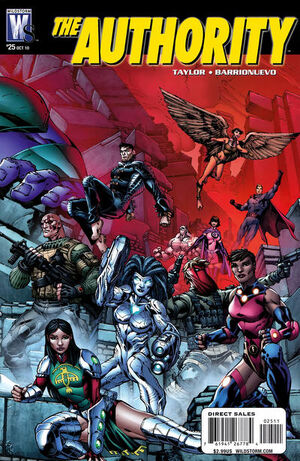 Appearing in "This is Gonna Suck"Edit

Synopsis for "This is Gonna Suck"Edit

The Carrier speeds away as Mondregon drifts dead in space. Aboard the ship, Jack Hawksmoor orders the Aegean's body ejected before it reanimates. Then Grifter probes him for information on the gun Jack used to kill the Aegean.

Jack talks about when he took over Gamorra City since his capture by Kaizen Gamorra and how bonding with the city allowed him to gain information about this weapon Gamorra had created. He tells of a lab assistant named Mayumi Kana and how her mind was grafted to the weapon in order to control it. Jack claims he intended to find a way to free her mind from the weapon but when The Carrier blasted off into space he decided to hold onto the weapon in case he needed it to stop The Carrier.

The others are not pleased about this, especially The Engineer. But she says they've got to recover from the battle with Mondregon before they deal with Jack. Flint unceremoniously disposes of the Aegean's body and joins the others. They find massive death and destruction left behind by the Aegean. Jack starts giving orders but the heroes are reluctant to listen to him. Christine Trelane intervenes and asks them to do their jobs.

Meanwhile, Jack checks on Deathblow and Swift in the new infirmary. Deathblow has recovered but Swift is still unconscious. They then get word that The Carrier appears to be arriving at its destination. Jack decides to let Deathblow and Grifter have their pick of anything in The Authority's armory.

The Carrier approaches what Angie and Jack call a Chthonian planet. They then see what looks like another shiftship but Angie says there's no one on it. Then The Carrier is drawn to what looks like a giant space port. But they soon realize it's not a space port but some sort of trap as The Carrier is impaled on a giant spike. Angie's liquid metal flows off her body and she says she's been disconnected from The Carrier because she thinks it's just been killed. Then, several Shift-Doors open throughout the ship and the team prepares for whatever is about to come through.

Retrieved from "https://heykidscomics.fandom.com/wiki/The_Authority_Vol_4_25?oldid=1413200"
Community content is available under CC-BY-SA unless otherwise noted.