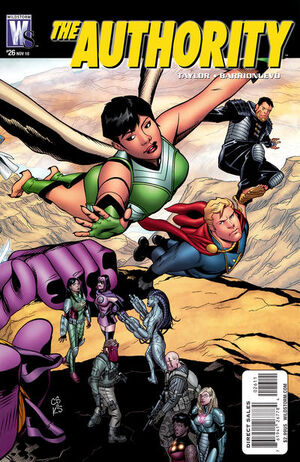 When I was a child I was taken and I was experimented on. The creatures that did this didn't bother with anesthetic. They didn't care how much pain they caused. They left with a thousand enhancements and one enormous grudge. What they did to me means I can talk and control cities. And you've yanked me into a city the size of a moon. I have been pissed off with things like you since I was five years old... It's time to work out some aggression!

Gigantic alien creatures begin pouring through the open Doors and attacking the heroes. Jack Hawksmoor, Flint, and Grifter are all captured as the others escape. Throughout the ship the creatures round up the humans too; killing some in the process. Then they are taken to a huge facility where where everything seem to be organic.

Meanwhile, Christine Trelane, River, Freefall, Rainmaker, Angela Spica, and Deathblow narrowly escape the creatures by having River hide them with his powers. They decide to hold up and figure out a way to reactivate The Carrier so they can rescue the others. In the infirmary, something strange is happening with Swift's unconscious body as it seems to disappear while the creatures are there and reappear when they leave.

Jack and the others are dumped into an area where all the other refugees have been brought. One of the creatures stabs a man in the head and begins to speak through him. Jack decides to try and fight them but somehow the entity that surrounds them gets inside Jack's mind and he sees that this is a organic city world which uses different life-forms to sustain itself. It speaks to Jack, telling him it encountered humans eons before they could even speak and now it will use them.

Retrieved from "https://heykidscomics.fandom.com/wiki/The_Authority_Vol_4_26?oldid=1413201"
Community content is available under CC-BY-SA unless otherwise noted.