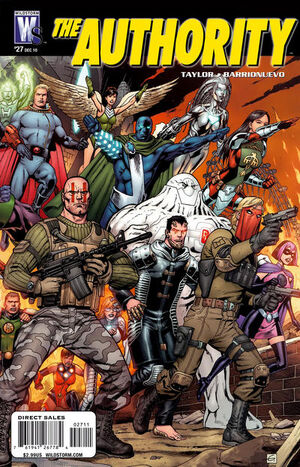 On The Carrier, things have gotten quiet as the aliens have left the ship. River detects a sole life-form in the infirmary and they discover it's an unconscious Swift.

Meanwhile, Grifter tends to Jack Hawksmoor who is recovering from his encounter with the aliens. The aliens begin to group the people according to categories, even going as far as to leave all the heroes assembled.

The other heroes are baffled as to why the aliens left Swift behind. Christine asks Angie how they can power up The Carrier again. Angie reminds her that The Carrier is supposed to be powered by a baby universe which has been missing since Jenny Quarx disappeared. Christine brings to her attention that there are other captured Carriers around them. But River tells them he senses another power source somewhere out there so they head off to find it.

The aliens finally make their move to start collecting the heroes and Flint tries to fight back. But the aliens claim they've dealt with beings like her before and are actually able to hurt her.

The others make it to the power source River sensed and find several baby universes being held. But with them is a brain that has the ability to speak. It tells them that these creatures were part of a race called the Karibna. The Karibna exhausted the resources on their own planet and built this space station. Then as their resources dwindled they began to alter themselves to survive. The brain was part of a peaceful race that tried to help the Karibna but were betrayed. The Karibna use the brain to lure other ships which are used as harvesters to bring new life-forms to the Karibna.

The brain tells them that if they will kill it, it can free all the ships. Deathblow is about to do it but River stops him and offers to do it gently by stopping the brain's feed. Angie's nanites work again which means The Carrier is back online. Then River opens Shift-Doors around the station to release all the captive aliens, rescue Hawksmoor, Grifter, and Flint, and even opens a door next to a container where an unknown voices calls out, "Hello?"

Retrieved from "https://heykidscomics.fandom.com/wiki/The_Authority_Vol_4_27?oldid=1413202"
Community content is available under CC-BY-SA unless otherwise noted.