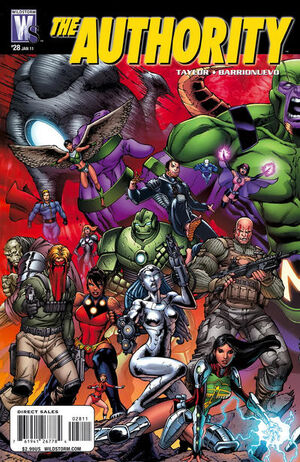 You said it's been a while since you dealt with humans, right? You said last time you encountered us we could only grunt and scream. Well, we've grown up. This one has grown up to be a lovely liquid-metal lady. She isn't going to grunt. She isn't going to scream. She's just going to kick your ass.

Appearing in "Fight and Flight"Edit

Synopsis for "Fight and Flight"Edit

River begins opening Shift-Doors around the Karibna's space station which allows all the captive creatures to return to their Shiftships. The others ask River to open a Door for them to escape but he says he can't because he has to stay to keep all the other Doors open. He asks them to keep the Karibna at bay while he does his task. Rainmaker, Deathblow, Freefall, and Christine Trelane are all that stands between River and a horde of Karibna. But Rainmaker steps up and uses her powers to collect the blood in the atmosphere and make it into hail that she rains down on the Karibna.

Meanwhile, Jack Hawksmoor, Grifter, and Flint finally get a Door open to The Carrier and they're able to bring The Engineer through to help. River then contacts The Engineer and ask her to multiply herself so she can help him defend the Doors he's opening. Once they are all on The Carrier, River seals the other Doors so they can all escape. But Hawksmoor says he knows where the heart of the station is and he wants to take Mayumi down there to destroy it.

As The Carrier begins its escape, Hawksmoor reveals he still has Mayumi's head but she's actually happy that he's found a way to kill her that won't harm others. He uses her power to destroy the heart of the Karibna's space station, which begins to plummet and burns towards its planet, and then narrowly escapes the Karibna as he makes it back onto The Carrier into The Engineer's awaiting arms.

Retrieved from "https://heykidscomics.fandom.com/wiki/The_Authority_Vol_4_28?oldid=1413203"
Community content is available under CC-BY-SA unless otherwise noted.