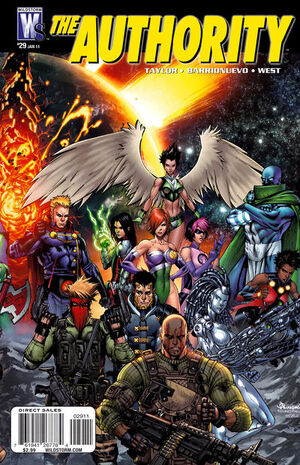 I'm ten years old. Stop looking at me for all the answers. I'm sick of it. Next time you want something, bring me a toy!

Appearing in "Change, Not Die"Edit

Synopsis for "Change, Not Die"Edit

The Carrier speeds its way back to Earth. The Engineer is convinced that the information River downloaded from the alien being can be used to help their Earth. But a fleet of surviving Karibna is hot on their tail. River and Angie assure the others that they have a plan.

The Carrier exits The Bleed and they see Mondregon before them once again. But Angie pilots around the giant creature as it attacks the Karibna ships. But before they escape back into The Bleed, the team gets a welcome surprise as The High comes onboard showing that he survived his fight with Mondregon.

Hawksmoor is discouraged that they couldn't find a way to help Earth but Angie reminds him that they rid the universe of the evil Karibna and saved the untold billions of aliens who were captured. The High also reminds Jack that heroes never truly die. It is his experience that they always come back and that is why he's convinced the Earth will be repaired as well.

As The Carrier arrives at Earth, Jack still feels distraught that they couldn't find any other help. He voices his concerns to the still comatose Swift. But Swift's consciousness is in the Garden of Ancestral Memory being greeted by Jeroen Thornedike and the past Doctors who welcome her as the new Doctor of Earth.

Retrieved from "https://heykidscomics.fandom.com/wiki/The_Authority_Vol_4_29?oldid=1413204"
Community content is available under CC-BY-SA unless otherwise noted.