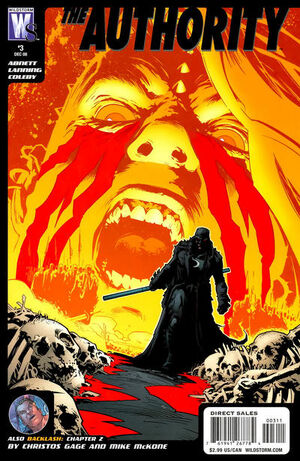 You see? You only had to ask. Not demand. Ask. That is how civilized people used to behave.

As Apollo recharges near the sun, he muses about what the rest of The Authority is doing back on Earth. While deep in thought, he notices a flash in Earth's orbit but can't investigate it until he's fully charged. Back on Earth, Midnighter demands that Eidolon and his army stay away from The Authority and the refugees within The Carrier. When Eidolon doesn't show cooperation, Midnighter decides to kill him in order for the army not to invade. He succeeds but Eidolon resurrects himself. Eidolon makes no apologies for what he and his army have done so he invites Midnighter to continue to kill him to his heart's content. Midnighter chooses to leave and Eidolon tells Midnigher that he and his army will not attack The Carrier and that simply asking so yielded better results than demanding it. Midnighter leaves without a word.

Angie gathers some volunteers from amongst the refugees and they set out to explore the remains of The Carrier for any supplies. While searching, they encounter a active bug-like metallic creature that should not be functioning because of the E.M. Pulse. Angie tries to catch it but it outruns her. She calls Swift for help and Swift heads after the creature will all her bird companions in-tow.

Meanwhile, Midnighter takes a tank of oxygen and heads to the top of The Carrier where he summons Apollo using some balloons as a signal. Apollo knows something is wrong and Midnighter admits to him that Jack Hawksmoor's view of their current situation is right.

Swift chases the creature to Outer UnLondon and into Rendelsham, Suffolk. She is then confronted by two huge robotic creatures which one of them introduce themselves as the sanctioned Jump Jets of the Establishment and wants Swift to come with them immediately.

Marc Slayton continues to battle up the levels of I.O. Research and Containment Facility #42 against the monsters and mutants that escaped. One of the monsters captures Slayton and he's forced to use his ability to turn into mist. While it allows him to escape, it can only be used once a day. It also only allows him to take with him whatever is closest to him. He makes it to the 3rd level but finds that he not only left all his clothes (except his underwear) behind but also his cybernetic leg as well.

Retrieved from "https://heykidscomics.fandom.com/wiki/The_Authority_Vol_4_3?oldid=1413178"
Community content is available under CC-BY-SA unless otherwise noted.