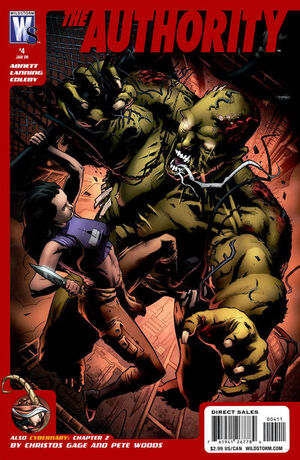 Swift tries to escape the two jump-jet constructs that have confronted her but is brought down by The Golden.

Afterwards, Angie heads down to lead the refugees on another technology salvage mission. As she directs them to begin, one of the refugees appears to be ill but soon reveals that he has Warhol Fever as he transforms into a monstrous Incubite. Angie draws it away from the refugees but the Incubite finds the water supply and explodes, contaminating the water.

Meanwhile, Swift is brought before a man named Hawthorne who claims to work for the British government. He takes her on a tour of the facility Rendelsham that the Authority had visited before when Earth was invaded by Sliding Albion where Hawthorne states that the Ministry of Defense has been working on projects that will help the world.

Cybernary is ready to kill her father Kaizen Gamorra. But he tells her that it was not he, but the doppelganger placed by Internal Operations, who ruled when she was first created. Cybernary tells him that it is not just what happened to her, but all the countless evil acts that Kaizen has committed that justify his death. Kaizen tells her that only the strong survive in this world. As some of his view screens become active and show the Reapers attacking around the world, Kaizen tells Cybernary that Armageddon has arrived.

Retrieved from "https://heykidscomics.fandom.com/wiki/The_Authority_Vol_4_4?oldid=1413179"
Community content is available under CC-BY-SA unless otherwise noted.