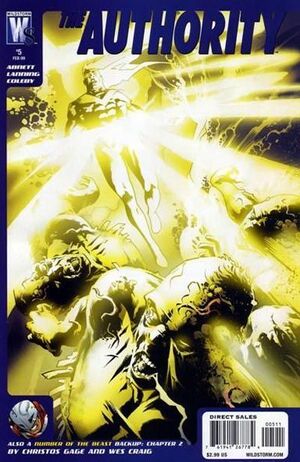 A Warhol Fever outbreak has occurred within one of the refugees camps aboard The Carrier and Incubites are now running wild. While Midnighter tries to seal off the sector where the outbreak occurred, Angie desperately tries to get as many people as she can to safety. But The Authority members have already agreed that an outbreak must be sealed regardless of who is caught up in it. Attitudes change when Swift returns and Midnighter tells her that Angie is sealed inside. He tells Swift to get Apollo.

As Angie reaches the sealed door, she demands that Jack let them out. But Jack vehemently sticks to the agreement and leaves her and the others trapped; claiming he'd expect her to do the same if it was him. Abandoned, Angie tries not to give up hope but the Incubites arrive and she prepares for the end. Suddenly, Apollo bursts through the hull and begins incinerating the Incubites. Angie gets the survivors and heads for another exit. But before Apollo can finish the job, an Incubite pounces and bites him on the arm. He kills it and quickly flies away. Angie radios Jack and tells him they'll wait twenty-four hours to see if any of them are infected and if they're not, she'll demand that they be let out. Twenty-four hours later, Jack complies but Angie lets him know how cold-hearted he has become.

Meanwhile on the Suffolk Fenlands, a group of British agents from Rendelsham are exploring some mysterious readings coming from a remote area. They find an abandoned home but find that when they enter it, it appears they are transported to an area where the home is still intact in an area that looks unaffected by the cataclysm. An old lady approaches them asking if they'd like some tea, but before the men can answer, they each begin to die inexplicably.

The hero known as Missile-Man continues his story about the crashed alien ship in the Nevada desert in 1945. Once inside the ship, he finds a crew of Daemonites; most of them dead. After some investigating, the government officials realize that the Daemonites used stasis tubes that created a virtual reality where they could 'exist' during their long space voyages. They also realize they could use this as a virtual prison for the growing super-criminal population. They recruit Missile Man to begin rounding up as many villains as he can. But what Missile Man doesn't know is that the government plans to put him in the program along with the villains when his work is complete.

Retrieved from "https://heykidscomics.fandom.com/wiki/The_Authority_Vol_4_5?oldid=1413180"
Community content is available under CC-BY-SA unless otherwise noted.