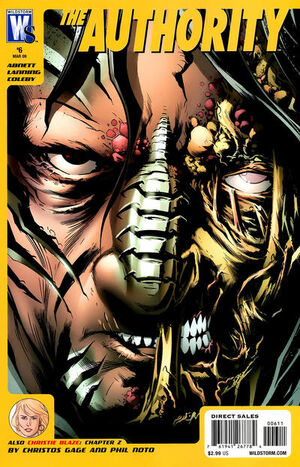 Nasty is how it is these days. Get used to it.

Angie and Swift are chasing a man through The Carrier. Midnighter easily takes the man down but Swift asks Midnighter not to harm the man until they can get some information out of him. Angie finds a necklace the man had with a lightning bolt symbol on it. As Angie tries to figure out where she's seen the symbol before, Jackson King, Christine Trelane, Winter, Hellstrike, and Fuji of Stormwatch teleport in front of her.

Surprised and angered by their presence, Angie questions why Stormwatch took so long to contact them. Then she realizes the man they were chasing was a Stormwatch spy. Christine explains that they only came to work in cooperation to help alleviate some of the problems both teams are facing. Before she can continue, Jack Hawksmoor who apparently had been listening to the whole conversation, decides he's heard enough and leaves. Jackson King heads after Hawksmoor. Angie discusses with Christine what they need; starting with the fact that Apollo is currently missing. Swift also asks if Stormwatch knows about Rendelsham.

Meanwhile at Rendelsham, Lorenzo is enjoying a cup of tea as he observes The Golden. There are only two of The Golden now and Lorenzo watches as they scan the "Door" out into the ether looking for their lost sibling. The man called Hawthorne approaches Lorenzo with a report about one of their scout teams that has gone missing. Lorenzo looks at the report and decides they're going to need help with this one.

King catches up with Hawksmoor and tries to convince him they can still save the world. Hawksmoor is convinced it's too late but King offers to give The Carrier some power which will turn it into a city again. He leaves Hawksmoor to think about it.

Christine Trelane reviews with Angie what steps will be taken now that they are working together. First, Midnighter and Fuji clear some of the abandoned sections of The Carrier in preparation for refugees from Skywatch III. Then, one of The Carrier's spires is turned into a functional power conduit. Skywatch III will regularly beam down energy to The Carrier as the space station's reservoirs peak. The Carrier comes alive once again. Unfortunately, it does not go unnoticed by Eidolon.

Eidolon and his army waste no time in attacking the newly powered Carrier. Stormwatch and The Authority rally together to defend The Carrier. Deathblow and Flint teleport in from Skywatch III to join the battle. Angie and Christine monitor the battle from within The Carrier. But Eidolon appears before them claiming that his army was only a distraction. He incapacitates Christine and chases after Angie.

Without her powers, Angie cannot defend against Eidolon. As she tries to escape she begs the nanotechnology lying dormant in her blood to activate. Eidolon loses sight of Angie but tracks her down and prepares to kill her. But when he finds her, he discovers that her nanotechnology is responsive again. Angie stands before him in full battle mode as The Engineer

Several years after Miles Craven blackballed her from Team 7, Christie Blaze finds herself in the presence of International Operations' new director, John Lynch. He apologizes for Craven's treatment of her and tells her he needs her help in a move against Craven. During their clandestine meetings the two rekindle their lost love.

Lynch tells Christie of a woman named Dominique Faust and a division she heads called the Black Arts Bureau. He tells Christie to infiltrate the division and find out why they exist. Later, Christie reports that the bureau is interested in investigating and harnessing occult power, especially something called The Creation Wheel. As Christie continues her report to Lynch, Faust somehow activates an artifact which they recently found in an old ship wreck. Faust appears to become possessed by the forces within the artifact.

Retrieved from "https://heykidscomics.fandom.com/wiki/The_Authority_Vol_4_6?oldid=1413181"
Community content is available under CC-BY-SA unless otherwise noted.