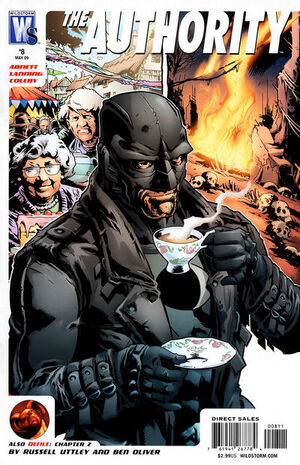 Don't think this place is going to clinch the village of the year trophy, though.

From Midnighter's point of view, it's been a week since he approached the abandoned cabin and found himself transported to a place seemingly unaffected by Armageddon. He's also played along with being a vicar for the town, waiting for the others to find him. Angie and Swift finally show up and let Midnighter know that from their point of view, it's only been twenty minutes since he disappeared. Angie tells him they must be in some sort of pocket reality.

Meanwhile, their presence in the town hasn't gone undetected. They are attacked by a group calling themselves "Team Unicorn." The group consists of British Bulldog, Dr. Dee, Mosquito, and the giant Gog. As Midnighter battles Dr. Dee, he realizes Dee has no qualms about taking out civilians to get at Midnighter. Swift ends up squishing Mosquito and Angie is left to deal with Gog. Angie throws a grenade at Gog and causes him to fall onto Dr. Dee, apparently killing him.

Elsewhere in the town, a maid approaches her master, identified only as 'Charles' and tells him that Team Unicorn was defeated. He becomes angered by the news, tells the maid to take his wife and kids indoors, and proceeds to fly up into the air. As he does, his human face slowly morphs into the face of a clock. He descends towards Midnighter, Angie, and Swift telling them he won't have them disturbing his family. He then attacks the three of them with some sort of energy wave.

Lord Defile prepares for the coming of Rapier, a powerful Daemonite sorcerer, to Earth. Rapier shows up but is in the body of a young skate-boarder. Defile is not amused by Rapier's attempts at humor, and grabs his hand. Defile breaks Rapier's hand telling him that Earth is not a viable Daemonite colony and it belongs to him. Rapier uses his magic to embed Defile in the ground in front him. With only his head still exposed, Defile threatens to destroy Rapier. But Rapier uses his magic and suddenly...

...Defile is back in his underground lair just as before, waking and yelling out Rapier's name. He deduces that Rapier must have channeled massive energies to open a portal between Daemon and Earth. Defile decides that he too will need a source of enormous power in order to defeat Rapier.

Retrieved from "https://heykidscomics.fandom.com/wiki/The_Authority_Vol_4_8?oldid=1413183"
Community content is available under CC-BY-SA unless otherwise noted.