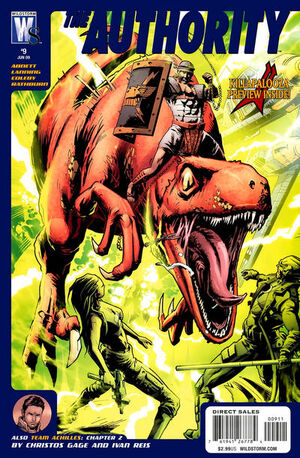 The strange man who has a clock for a face continues his attack on Midnighter, Angie, and Swift telling them they are not welcome in his domain. Angie realizes that he's using "weaponized time" against them. The man claims he's been protecting the queen since 1958. Angie then realizes this man has no idea what has happened to the outside world but he won't listen when she tries to tell him.

The man uses his temporal powers to summon warriors from different time periods to fight for him: Dinosaurs, tanks, bi-planes, ancient Spartan warriors, and tribesmen. As Angie narrowly evades a bombing run, she comes to a telephone booth where the phone appears to be ringing. She answers it and it's Hawthorne calling from Rendelsham. He tells her that the man they're fighting is codenamed Meantime. They believe he has used his time-manipulation powers to create this pocket reality because he can't deal with what has happened to the real world. His actions threaten the space/time fabric so they intend to send The Golden to execute him.

The Golden proceed and as Meantime screams in pain, everything around them is returned to normal. However, the attack did not kill Meantime. He is kneeling over the skeletal remains of his family, weeping. Angie tries to comfort him but he becomes enraged and begins to go critical. Meantime begins to recreate his pocket reality and the others try to stop him. As Meantime is distracted talking to his dead family, Midnighter grabs the hand off of the big clock and impales Meantime. For now, another crisis is over.

Later, the trio returns to the Carrier. They call out to Jack Hawksmoor but only find the carcass of a slain Incubite. Jack then appears, no longer in his wheelchair.

Appearing in "Team Achilles: Into the Fire - Chapter 2"Edit

Synopsis for "Team Achilles: Into the Fire - Chapter 2"Edit

After a successful teleportation, Team Achilles finds themselves in Moynihan's Bar in Manhattan. The news is reporting on StormWatch's new orbital satellite, Skywatch III. Ben Santini asks a bar patron what they're taking about after they state that the Post Human Division will remain on Earth. The patron fills them in on what the Post Human Division is. Baron Chaos and the other villains previously in-tow with Team Achilles make a run for it. Santini decides to let them go after seeing StormWatch Prime on T.V. and realizing they're active once again. Flint can't believe she sees her old StormWatch teammates alive and runs off to see them.

Seeing that the world has forces still protecting it, Santini resolves for them to take some time to enjoy life now. However, this idea is short lived as the Reapers suddenly begin attacking around the world (as seen in Number of the Beast). Santini and his team prepare to head out and face this threat.

Retrieved from "https://heykidscomics.fandom.com/wiki/The_Authority_Vol_4_9?oldid=1413184"
Community content is available under CC-BY-SA unless otherwise noted.