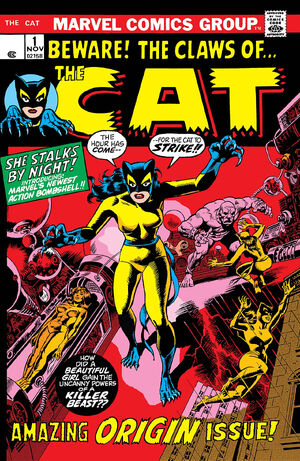 Appearing in "Beware the Claws of the Cat"Edit

Synopsis for "Beware the Claws of the Cat"Edit

Greer Grant was a sophomore at the University of Chicago when she met and fell in love with rookie policeman Bill Nelson. She dropped out of college to marry him, but a year later he was killed when they interrupted a robbery. The policeman's widow sold their house, moved to an apartment, and tried to find a job. The only opportunities open to her were secretarial. As she was about to lose hope, she ran into her old physics professor, Dr. Joanne Tumolo. The doctor offered her a job as her lab assistant. Greer went back to school as well.

After several months, Dr. Tumolo told her the goal of her private experiment. She hoped to allow women to totally fulfill their physical and mental potential -- despite the handicaps society placed on them. The doctor had run out of funds, and been forced to accept the sponsorship of a world-famous eccentric, sportsman, and entrepreneur, Malcolm Donalbain. Dr. Tumolo wanted Greer to be the first subject, but Donalbain overrode her. Instead, their "first lovely guinea pig" would be his choice, Shirlee Bryant. Dr. Tumolo was prepared to abandon the experiment, but Greer convinced her to clandestinely test Greer as well.

Unbeknownst to the doctor and her protege, Donalbain told Shirlee he would open a nationwide chain of health clubs that would incorporate Dr. Tumolo's treatments. He had Shirlee use her enhanced senses and memory to copy the doctor's process and used her specifications to create a duplicate at his headquarters. He also had dozens of cat-like uniforms created, which Shirlee and other trainees would wear as members of a secret army. Using the health clubs as a front, Donalbain's force would slowly subjugate the entire country. Shirlee fell in with this plan.

Donning one of the Cat uniforms, Shirlee grudgingly found her ability to receive the maximum amount of stimuli allowed her to exploit the mechanically amplified hearing and optically enhanced vision offered by the uniform's mask. Furthermore, her augmented strength meant she could use the steel claws built into the gloves and boots to dig in and climb walls like her namesake.

Donalbain supplied Shirlee with one more accessory to the uniform, a collar with metal studs. Having already acquiesced to wearing the rest of the outre outfit, she nonchalantly secured the collar around her neck. The collar, which Donalbain dubbed a "will-nullifier", rendered the wearer helpless to resist his commands. Without regard for her own safety, Shirlee followed Donalbain's orders to test her abilities by climbing a six-story wall and swinging across the atrium to the other side. She died in a fall, although it was unclear if the equipment failed or she panicked. Donalbain callously made plans to replace her with another prototype.

Dr. Tumolo had determined that Shirlee's test results were so inferior to Greer's that she should terminate the experiment. She had gone to Donalbain's headquarters to call an end to his involvement and had accidentally witnessed Shirlee's demise. She tried to slip out unnoticed. Stumbling across the closet containing the Cat uniforms, the doctor took one as evidence of his scheme. She found Greer still at the lab and told her what she had discovered. Promising to stay with the distraught scientist, Greer made a short trip to her apartment to pack an overnight bag. While she was gone, Donalbain's henchmen set off an explosion to destroy the evidence of the experiment at Dr. Tumolo's lab.

Swearing to avenge her mentor and Shirlee, Greer put on the Cat uniform Dr. Tumolo had obtained and used it to invade Donalbain's headquarters and overwhelm his henchmen. They recognized the uniform and Donalbain, putting 2 and 2 together, realized it was Greer Nelson wearing it. He attempted to take advantage of this windfall by equipping her with a will-nullifier and making her his next prototype, but she escaped. She sabotaged the experimental equipment and, as a result, set the building on fire. Rather than let the Cat capture him, Donalbain shot himself with his own pistol when it proved ineffective against her superhuman agility. Greer was left to ponder "Have I become a stronger woman -- only to become a poorer human being?"

Retrieved from "https://heykidscomics.fandom.com/wiki/The_Cat_Vol_1_1?oldid=1418471"
Community content is available under CC-BY-SA unless otherwise noted.