Hey Kids Comics Wiki
Register
Don't have an account?
Sign In
Advertisement
in: Hosts, Based on EC Comics 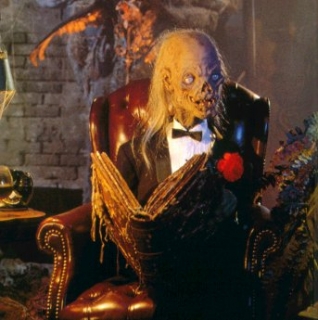 Role On The Show

The host of Tales From The Crypt serves to introduce and close out each episode with his signature brand of black humor and ghoulish gags.

This version of the Crypt Keeper is not even close to what the comic book presented. The Crypt Keeper of the TV show is more corpse-like (although he keeps the white hair) and often trades in his signature brown robe for another suit to fit in with the story he will be telling.

The new updated look of the Crypt Keeper has its roots firmly in the horror genre as Kevin Yagher, who was instrumental in the creation of Chucky from the Child's Play Series and the effects for the third Nightmare on Elm Street film, created the Crypt Keeper Puppet used. It is notably similar to the design used for the Creep in Creepshow, a movie based on the EC Comics, although the Creep's design in Creepshow 2 more closely resembles the original Crypt Keeper.

The Crypt Keeper's origin story in the TV show is pretty much the same as in the comics with a few exceptions. In the show's version of the origin story "Lower Berth", Enoch has two faces instead of heads, and he was also still alive. Two deaths were also added to spice things up, and the Crypt Keeper implies that Enoch and Myrna have died and that he wished they were there to see him now.