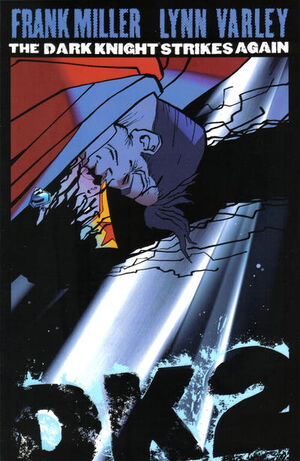 Batman and Catgirl break into Lex Luthor's complex. They defeat several of Luthor's thugs and Batman beats on Luthor. He slashes a Z into Luthor's face and he and Catgirl leave. Barry collects Elongated Man. Superman meets with Wonder Woman and she tells him that she is pregnant and the two go see Luthor who orders them to save the world from an alien invasion. Batman, Catgirl and Elongated Man break into Arkham Asylum and free Plastic Man. Joker kills the Guardian and the Creeper. The "alien monster" is actually run by Brainiac. Brainiac and Luthor have cooked up a scheme to kill Superman in front of the world. They have blackmailed him into not fighting their "invasion." The Question meets with J'onn J'onnz. Joker kills J'onzz and wounds Question, dying in the process himself. Wonder Woman and Captain Marvel help Superman. Seeing her father, knocked down and seemingly dying, the new Supergirl, the daughter of Superman and Wonder Woman, reveals herself and defeats Brainiac's monster. Batman makes his first public appearance in three years and starts a revolution.

Retrieved from "https://heykidscomics.fandom.com/wiki/The_Dark_Knight_Strikes_Again_Vol_1_2?oldid=1421802"
Community content is available under CC-BY-SA unless otherwise noted.