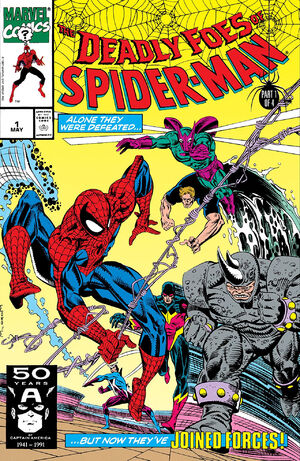 Appearing in "Punishment and Crime"Edit

Synopsis for "Punishment and Crime"Edit

Abner Jenkins was parolled from the Tombs Prison in an arrangement set up by the Kingpin. Returning to the guise of the Beetle, Abner starts up his own Sinister Syndicate with Boomerang, Hydro-Man, Rhino, and Speed Demon in an effort to score big on a bank heist.

Retrieved from "https://heykidscomics.fandom.com/wiki/The_Deadly_Foes_of_Spider-Man_Vol_1_1?oldid=1729910"
Community content is available under CC-BY-SA unless otherwise noted.