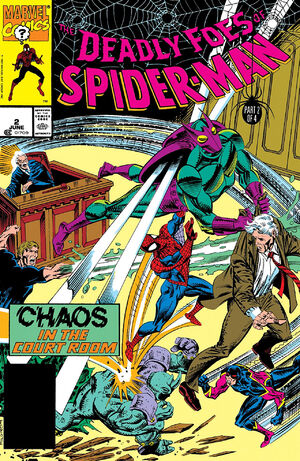 Appearing in "The Price of Justice!"Edit

Synopsis for "The Price of Justice!"Edit

At the end of last issue the Beetle was focusing his sonic cannon on Spider-Man. Here he has Spider-Man in his sights, when Leila bumps his sonic cannon. The blast from the cannon veers off and blows a hole in a nearby prison cell containing Herman Schultz.

Retrieved from "https://heykidscomics.fandom.com/wiki/The_Deadly_Foes_of_Spider-Man_Vol_1_2?oldid=1723850"
Community content is available under CC-BY-SA unless otherwise noted.