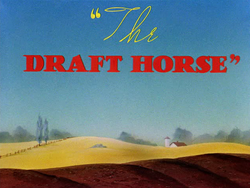 The Draft Horse is a Warner Bros. cartoon released in 1942, directed by Chuck Jones. Mel Blanc provided the voices. Robert Cannon is the animator, Tedd Pierce is the screenwriter and the music of this cartoon was done by Carl Stalling. The title is a pun on draft horse and the Draft.

A farm horse sees a poster that says the U.S. Army needs horses. The horse goes to the recruiting station and tries to volunteer, but is eventually rejected, labeled "44-F". Leaving the station dejected, he wanders into a wargames situation, and the flying bullets frighten him so much he makes a dash for home. At the end, he is serving the war effort in another way, knitting "V for Victory" sweaters for the boys overseas.

One amusing bit that highlights the Warner cartoonists' penchant for going to the edge of general public taste without quite crossing over, is this "eye chart test", underscored by the music connected with You're in the Army Now,:

You're in the Army now [normal size letters]
You're not behind the plow [smaller letters]
You'll never get rich [very small letters]
By diggin' a ditch [letters too small to read]
YOU'RE IN THE ARMY NOW! [huge letters]

The missing line can either be rendered "You son-of-a-bitch" or "By diggin' a ditch", depending on the audience. A similar gag was employed by Tex Avery in MGM's 1942 cartoon, Blitz Wolf.