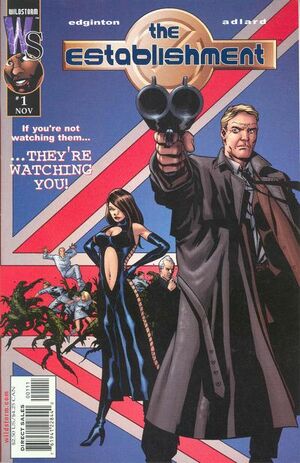 Appearing in "Man In A Suitcase"Edit

Synopsis for "Man In A Suitcase"Edit

The prologue of this issue shows a failed nuclear test down in the South Pacific in 1968. The story then cuts to Hobb's Bay, England, in the present day. An old man smokes a cigar as young Ian Hotspur pops out of a suitcase portal ready to begin his daily surveillance of the small town. He talks with his teammate Scarlet Fantastic, who prods him out the door to get to work. Ian exits the bed and breakfast he's staying at and passes by the old man, whose name is revealed to be Charlie Arrows. Charlie tries to talk to his old flame Rose, the B&B's manager, only to get slapped for his trouble. Ian notes Charlie's appearance and suspects him of being connected to a suspected future attack on Hobb's Bay.

The story next cuts to a pair of hijackers currently on the Irish Sea. Rycott and his nonhuman associate are clearly more than they appear. They discuss how unprepared Hobb's Bay will be for the coming assault, as well as their contact who they plan to meet.

Charlie Arrows, rebuffed by his lady love, goes to buy some whiskey, only to be again rebuffed by a younger woman who consults her manager. The manager recognizes Charlie and immediately has his employee sell him some whiskey. The manager then tells the ignorant woman that Charlie Arrows was the chief enforcer for Ted Lewis, a former British mobster. Charlie attempts to drown his sorrows only to be bothered by an unwelcome visitor from his past named Paul Frost. Paul sits down and talks about what brought him back to Hobb's Bay. Charlie's only reply is 'cancer'.

We go back to the hijackers almost at Hobb's Bay, with Ian Hotspur watching for a sign that he should act. Trouble is close.

Charlie pours out his troubles to the friendly Paul. He only has a few weeks to live and wanted to make his piece with Rose. He reveals that Rose raised their child alone, a likely reason for Rose's anger at Charlie. Paul goes on to surprise Charlie with the revelation that Charlie also has a granddaughter named Lucy, her mother having died in childbirth. This surprising news pushes Charlie to get up and go back to make peace with Rose, but he is greeted at the docks by an approaching vessel, the hijackers' ship. "They're early," Paul says as he immediately shocks Charlie into unconsciousness, not wanting him to interfere.

The hijackers board the dock from their ship and reveal themselves as Daemonites as Ian rushes into action summoning a set of hard light armor. Facing overwhelming odds and armed only with a hard light sword and shield, Ian Hotspur, The Baron, goes down fighting. Scarlet Fantastic and Jon Drake realize that Ian is in trouble, noticing that the Baron armor has been segued (i.e. teleported) from the arsenal. Jon, the leader of the Establishment, immediately orders Scarlet to recall all of their operatives. They're going to Hobb's Bay.

Retrieved from "https://heykidscomics.fandom.com/wiki/The_Establishment_Vol_1_1?oldid=1425831"
Community content is available under CC-BY-SA unless otherwise noted.