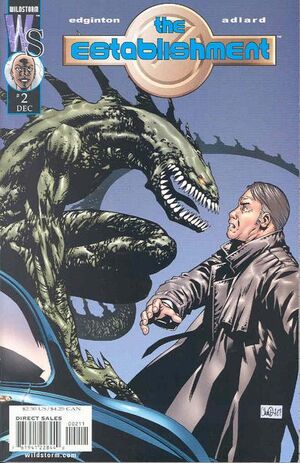 Charlie Arrows lies unconscious in a puddle of his own blood as the Daemonites and human mercenaries begin the massacre of Hobb's Bay. Paul Frost negotiates with the Daemonite leader, refusing to give up a secret location important to insure his job security. After a short chat, they leave to an undisclosed location, hoping to avoid any reinforcements for the slain Baron.

Charlie wakes up to the surrounding bloodbath and proceeds to his car. Unable to start the car due to a crisis of morality, Arrows proceeds to his trunk to get a stashed shotgun and pistol, which he uses to blast a Daemonite that planned to make him its next meal. Charlie begins blasting the Daemonite's human mercenaries. After a quick reload, Charlie runs off to rescue Rose. As he left, the Daemonite that Charlie shot is alive.

A trio of flying blonde teenagers, The Golden, receive orders from Jon Drake as they head towards Hobb's Bay with a 'port window' in tow. They have to secure the area in preparation for the rest of the team's arrival.

Back to Charlie, who has arrived at the now wrecked Bed & Breakfast where he finds Rose hiding in a back room. After a lot of bickering, where Rose blames Charlie for the current happenings and Charlie reveals that he's dying, the two former lovers head to a back alley and to escape in Ross' car. The Golden begin their attack on the hijacked ship, as the same Daemonite that was shot by Charlie surprises and kills Rose and prepares to do the same to Charlie. The timely intervention of the Golden saves the former gangster's life, and the trio immediately engages the teleport window. The rest of the Establishment arrives with Jon Drake, who immediately recognizes Charlie Arrows. Before a shocked Charlie could finish talking to Drake as he saw him died, he passes out, only to be ruled dead from Charlie's brain tumor by the medical Mister Pharmacist. Jon orders the team into action as Pharmacist adds a bit more cryptic information.

At the gated Cross Fell, Paul Frost and Pascal, the Daemonite leader, arrive at their destination, the secret location of a Kherubim ship.

Retrieved from "https://heykidscomics.fandom.com/wiki/The_Establishment_Vol_1_2?oldid=1425832"
Community content is available under CC-BY-SA unless otherwise noted.