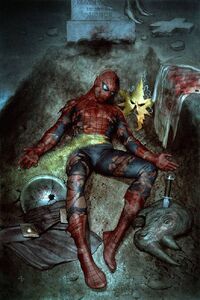 The Gauntlet is the storyline that has old Spider-Man villians such as Electro, the Sandman and the Rhino coming back upgraded or with new abilities somehow taking on Spider-Man. While this is going on, the supposed wife and daughter of the late Kraven the Hunter watch on the sidelines and slowly manipulate Spider-Man's world.

Electro's powers went out of control and began killing him. He then became a public spokesperson the recession and targeted Dexter Bennet, but became hated once again after destroying the Daily Bugle/DB! building. His condition was stopped when the Mad-Thinker treated him and also maxed out his power. However, after destorying the DB! building, Electro was arrested but confronted by Sasha Kravinoff and Chameleon to orchestrate a plot to break the new Vulture out of prison.

Sandman gained a new power to make more of himself but an unfortunate side effect caused each version to have a personality that was based on urges from Sandman's subconscious, which led to them murdering several people. He kidnapped who he thought was his daughter and kept on a paradise at Governor's island, but was thwarted by Spider-Man and thrown into a giant fan where he spread out into the air.

The Rhino, aka Aleksei Systevich went straight, got married, and got a new life working at Yonkers raceway after turning down becoming the Rhino again in a proposal from Dr. Trama. Trama found a new Rhino who was contacted by Kraven the Hunter's supposed wife and told him that he could be the Rhino without killing the old one. He tried to kill Aleksei, but after some protests from the former Rhino, the New Rhino warned him to prepare for their next meet. Aleksei asked Spider-Man to help him start a new life and flee New York, but the New Rhino attacked again this time killing Aleksei's wife. Aleksei donned his Rhino hide again and met his last stand in an explosive battle with the new Rhino. Rhino managed to kill the New Rhino, but Spider-Man and Nora Winters declare Aleksei Systevich "dead" as well.

Mysterio began working for the Maggia and ochestrated fake deaths of criminals only to have them returned. He was however attacked by Mr. Negative's forces and Spider-Man while helping criminals and was forced to retreat to a boat with some henchmen. Spider-Man followed and destroyed the boat, but Mysterio got away and was confronted by the Chameleon who wanted him to meet Sasha Kravinoff.

Spider-Man tracked down Mr. Negative to get back a vial of Spidey's blood, only for the Black Cat to seel it to Morbius after obtaining it. Spider-Man found Morbius, but found out Morbius only wanted the blood to make a cure for Jack Russel, the Werewolf by night. After a climactic battle Spider-Man gave some blood to Morbius.

Electro broke the latest Vulture out of prison, sending the man/bird hybrid on a quest to find who made him, creating a wild goose chase to all sorts of targets including the mob and Mayor Jameson. When newspapers began saying Mayor Jameson created the Vulture, Spider-Man created fake pictures to prove that he did not. However, Peter Parker was fired by Mayor Jameson because of this when exposing his pictures to the public and ran out of city hall. As Peter walks down the street wondering how worse his life could get, the Vulture is seen flying above.

After quitting S.H.I.E.L.D., Carmilla Black is hired by Sasha Kravinoff to steal the original Scorpion costume from the Hood who received it from Norman Osborn. Hood originally planned to give the costume to the low-level crook who impresses him the most. Despite interference by Spider-Man, Carmilla managed to swipe the Scorpion costume and give it to Sasha.

Connors is shown working for the pharmaceutical company Phelcorp working for executive Brian King who often antagonistically berates Connors in his lab. Connors has also lost custody of his son, Billy (who has also become emotionally distant from his father). As his life has gone into a downward spiral, he sometimes hears a bestial inner monologue, telling him to violently take what is his. The last straw is when his lab assistant that he's attracted to ends up sleeping with Brian King. Connors runs into his office to get a green vial. Brian King accuses Connors of trying to take his lizard serum, so he prevents him from taking it. Connors tells King that it is actually a Lizard suppressant before he transforms into the Lizard and eats Brian King. After eating Billy Connors, Lizard ended up shedding his skin and became a newer version of himself. This form is leaner, sporting spikes on its right forearm, having what appears to be long brown hair, is smarter than any previous form of the Lizard, and has new telepathic abilities allowing him to connect to the "lizard part" of the human brain. Spider-Man returns from Curt's lab with the formula Connors was using to keep the Lizard in control and drinks it making himself immune to the Lizard's new powers. He also spits some of it in the Lizard's mouth and injects the Lizard with two more vials of it. He then attempts to convince the Lizard this is wrong but he is attacked by the civilians under the Lizard's control. Suddenly, he is pulled out by the Lizard who then reveals he regrets what he has done and that he believes there is more in life than just killing. The sudden change of perspective is revealed to happen because when he destroyed Dr. Curt Connors personality, some emotions were passed to him. The Lizard then leaves into the night.

Retrieved from "https://heykidscomics.fandom.com/wiki/The_Gauntlet?oldid=1661471"
Community content is available under CC-BY-SA unless otherwise noted.