The Ghostly Trio (known as Fusso Lazo, Fatso) are fictional characters in the Casper the Friendly Ghost series. Their first animated appearance was in Fright from Wrong, a cartoon of Paramount Pictures' Famous Studios theatrical series from the 1950s. They have also made numerous Harvey Comics appearances and were featured in the Harvey Comic title Casper and the Ghostly Trio. Versions of the Ghostly Trio have remained prominent in subsequent adaptations/spin-offs.

Originally, Casper was on the show with countless ghost relatives, all apparently looked similar and usually quickly moved away to scare people. Except for the hilarious entertainment, these relatives did not appear to have special traits. Except in the school, where Casper's unwillingness to scare people negative noticed, most ghosts do not seem to interfere with their black sheep. In Casper's earlier appearances in animated cartoons and comic books by Harvey Comics, the Ghostly Trio, although also brothers, were depicted very differently. Like his later incarnation, Fatso was overweight and gluttonous (although since ghosts were capable of eating food in these stories, this trait was not as odd as it later seemed), but he was the Trio's leader by virtue of being the toughest and (marginally) smartest of the three. His second-in-command, Fusso, was of average height and build and characterized by exceptional fussiness and attention to detail. The third ghost, Lazo, was the tallest, laziest, and least intelligent of the brothers. Fatso's brashness and quick temper often led him into solo mishaps, as well as to occasionally share Casper's adventures, and the other two were sometimes called "the Ghostly Duo" in his absence.

Beginning with the 1995 Casper feature film, the Ghostly Trio's names are Fatso, Stretch and Stinky. This line-up has largely remained consistent ever since. In most of their appearances, they are shown to (in contrast with Casper) love scaring people. They generally seem to treat Casper as their own personal slave and greatly mistreat him. There are rare times that they look out for Casper, though this is sometimes out of pure self-interest. Notably, though, the 2006 TV-movie Casper's Scare School depicts the Ghostly Trio being uncharacteristically nice to Casper and caring a great deal for him. In fact, when Casper leaves for Scare School, they spend most of the time he's gone crying. 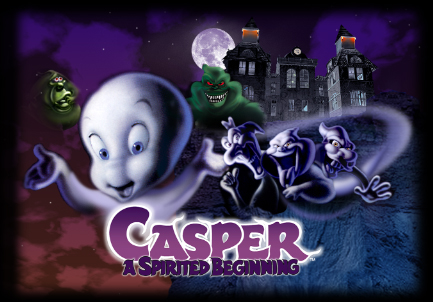 Also most of the time, the Ghostly Trio have a general hatred of humans. The only thing they usually like about them is scaring them. The 1995 film and spin-off cartoon series, however, show them achieving a friendship with Dr. James Harvey (Bill Pullman). At first, they demand he vacate their home and make his quest to learn about the afterlife exceedingly difficult. However, they eventually grow to like him and even consider expanding their group to a Ghostly Quartet for him. Of course, that would require killing him, but they ultimately prove unable to do it themselves. (Harvey later dies in an accident, but this proves temporary.) They also keep a promise they made to him by briefly reuniting him with his dead wife. The spin-off cartoon would depict them in a similar light, where they often harass the doctor, but out of mischievousness rather than hatred.

Stretch is the lanky leader of the Trio with the "Joisey" accent. Stretch is the most aggressive of the three when it comes to scaring the living and pulls no punches in his attempts to frighten anyone (whether by possession, morphing or simply appearing in front of someone). Although he acts the harshest towards Casper and his two brothers, he is soon revealed to have somewhat of a soft spot, and is perhaps the most sensible one in making important decisions (that is if they are important enough to care about).

Fatso is the obese and least intelligent of the three. He has a constant appetite for food, regardless of the fact that it literally passes through his body. He treats Casper the same as Stretch and Stinkie, but can easily be manipulated due to his lower IQ. When Stretch and Stinkie would ask about something relevant to a story, a running gag would have Fatso ask about something unrelated.

Fatso's appearance, voice, and his love for food makes him comparable to Slimer, a ghost from the Ghostbusters film series. In 1987 Harvey Comics sued Columbia Pictures (Ghostbusters' distributor) for $50 million, claiming that the iconic Ghostbusters logo was too reminiscent of Fatso. The court, however, ruled in Columbia's favor,[1] due to Harvey's failure to renew the copyrights on early Casper stories and the "limited ways to draw a figure of a cartoon ghost."

In the PlayStation video game Casper, Fatso was supposedly legendary baseball player Babe Ruth (revealed when Casper observed the portrait in the main hall). This has not established in the universe of the comic book or film series (in Reality, Babe Ruth never had brothers).

Stinkie is the "middle child" and dubbed the "Larry Fine" of the group. Stinkie's special talent involves supernatural halitosis and body odor, which he prefers to use as his means of frightening "fleshies" (humans) that dare cross his path. He has a penchant for puns and comedy, and comes off as the more sarcastic jokester of the three, which Stretch tires of more often than not. Casper's Haunted Christmas shows he has an interest in modern technology. Although just as nasty as his brothers, Stinky will be given on Cinema posters normaly a "friendly" face.

Casper's exact relationship to the Ghostly Trio is varied in different media. In the early comic stories, the unfailingly polite Casper never addressed any of them as "Uncle," suggesting that they were instead his elder brothers.

In the 1995 film and spin-off cartoon, they are said to be his uncles. In fact, the movie specifically states that they are all blood relatives sharing the last name of McFadden. This source comes from one of the books based on the film, and a deleted scene that never made it into the "attic" when they discussed Casper's inventor father. It could be possible they could be the brothers or cousins of Casper's father, J.T. McFadden, who all died under unknown circumstances.

Casper: A Spirited Beginning, though, clearly shows Casper is not related to the Ghostly Trio. Instead, they lie to Kibosh about being Casper's uncles so that he can remain in their care. The succeeding movie, Casper Meets Wendy, has Casper telling Wendy that the other ghosts with him are his uncles.

Casper's Haunted Christmas hints at a relationship of sorts. The Ghostly Trio refer to Spooky (Casper's cousin) as their nephew. Whether or not that makes them blood relatives, though, is unrevealed.

There seems to be a slight disagreement whether Casper's uncle are really white. In the first movie all the spirits are transparent, but the Ghostly Trio has a slightly blue tone. As a result, in the following movies, of all the movies with live-actors, Stinkie, Stretch and Fatso become deep blue; other colorful ghosts are Kibosh (green) and Snivel (yellow).

The Ghostly Trio itself is shown to be a very powerful and experienced group of ghosts, and the trio has vast supernatural powers, such as:

Actors to play The Ghostly Trio

Retrieved from "https://heykidscomics.fandom.com/wiki/The_Ghostly_Trio?oldid=1567394"
Community content is available under CC-BY-SA unless otherwise noted.